The Blue Flower by Penelope Fitzgerald

I haven't read any of Penelope Fitzgerald's work before, in fact, I've been known to confuse her with Penelope Lively. But Hermione Lee's 2013 biography brought her renewed media attention, so we decided, in my book club, to address our collective ignorance.

Penelope Fitzgerald came to writing late in life and wasn't published until she was sixty. She made up for lost time though, by winning the Booker Prize in 1979 with Offshore, to the surprise and dismay of many in the literary establishment. In all she had nine novels published, as well as biographies, essays and reviews. The Blue Flower was her last novel, published when she was seventy-nine and winning the National Book Critics Circle Award in the US. 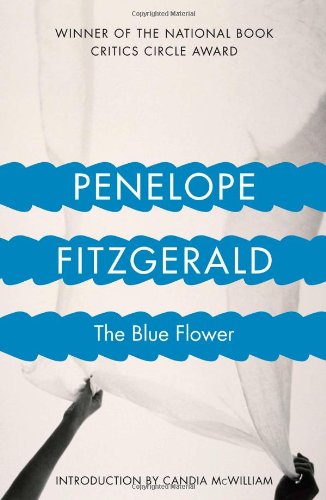 The Blue Flower begins in 1794, a fictionalised account of the younger years of Fritz von Hardenberg, later to become the poet and philosopher Novalis. It's the annual washday at Fritz's Saxon home in Weissenfels, seen through the eyes of his companion Jacob Dietmahler:


Here I am, a stranger to your honoured family, knee deep in your smallclothes

With this striking imagery, we're introduced to Fritz's many siblings, whose numbers are still being augmented regularly by a timid mother and sternly devout father.

The family is noble but far from affluent, rubbing by in a pickle of genteel squalor. Fritz is young and idealistic, influenced by the revolutionary zeal pervading France. Against his father's wishes, he registers to study history and philosophy at university, bringing him into contact with leading thinkers like Schiller, Ritter and the great Goethe. This is a world of new ideas, where the old practice of bleeding a patient to restore health is replaced by 'Brownismus', a prescription of exercise, sex and fresh air, combined with a balance of opium and alcohol.

Fritz's imagination catches what others don't see, but he must earn his living as a tax collector for the salt mines, lodging at the house of a presiding magistrate. On arriving there for the first time, he compliments the magistrate's niece Karoline, in her shawl and housekeeping apron. He's admonished, but replies:


When I came into your home, everything, the wine-decanter, the tea, the sugar, the chairs, the dark green tablecloth with its abundant fringe, everything was illuminated.

He's written the beginning of a story about a mysterious blue flower and asks Karoline for her interpretation. In her failure to compose a satisfactory answer, she feels she's lost the chance of his love. But, in reality, she's denied by Fritz's meeting with twelve-year-old Sophie:

His friends and family are astonished, not only by Sophie's extreme youth, but also because she doesn't seem all that exceptional. She can barely compose a letter or keep still for a portrait and she doesn't understand the blue flower, either. And it's the meaning of this flower, always sought but rarely glimpsed, which is revisited many times in this novel, like the echoes of a dream.

The past is brought to life so convincingly in The Blue Flower that it doesn't feel like historical fiction, but a vividly-realised tapestry of believable characters. Fitzgerald's prose is quietly imaginative and as elegantly spare as poetry. With the wisdom of her years, she reflects on the hopefulness of youth, but also on its losses and disappointments.

Instead of rushing ahead, I found myself having to recalibrate my reading to savour each word. Like the blue flower of the title, this novel is sometimes a puzzle which I wasn't confident of solving, but always intriguing and worth the pursuit.


The Blue Flower is published in the UK in paperback by 4th Estate.
Image of Penelope Fitzgerald courtesy of The Telegraph.

Posted by Claire Thinking at 15:44