Daphne du Maurier and Her Sisters by Jane Dunn

Last weekend my family and I made our annual pilgrimage to one of our favourite places, the idyllic Cornish town of Fowey, a location beloved of the du Maurier clan who still own a house on the riverbank at Bodinnick.


Which reminded me I was seriously tardy with my review of Daphne du Maurier and Her Sisters The Hidden Lives of Piffy, Bird and Bing by Jane Dunn, an accomplished biographer who lives near me in Bath. 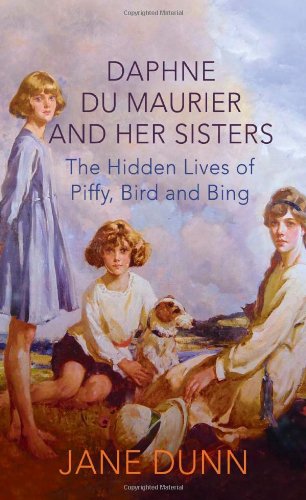 Previously she's examined the sibling bond between Virginia Woolf and Vanessa Bell and here she focuses on the writer Daphne du Maurier and her less well known sisters Angela and Jeanne.

Even before the eldest sister Angela was born, the du Mauriers were celebrities in Edwardian society; their father Gerald was renowned as the actor who made the role of Captain Hook in Peter Pan his own. J.M.Barrie was a family friend and the girls were taken every year to see the play performed at Wyndhams's theatre.

Throughout their childhood the sisters would re-enact the play in their nursery, the words and ideas becoming engraved deep into their psyches. Daphne was always Peter; Angela was more than happy to play Wendy, while Jeanne filled in with whatever part Daphne assigned her.

As in the nursery, so in the life of a family which created its own language and childhood nicknames. Daphne (known as Bing) took the leading role as her father's favourite, the one who had the looks, the talent and eventually the husband, children, money and fame as well. She lived increasingly in the world of an imagination more vivid to her than real life, often developing crushes on people as she perceived them rather than as they really were, using them as 'pegs' on which to hang the characters in her writing.

Angela (Piffy), considered plain from a birth in a family that valued beauty, lacked belief that she could really achieve anything of her own and fell easily in and out of love, firstly with men and then more often with women. She tried singing and acting before turning to writing and had several books published, but never emulated Daphne's success, leading her to entitle her biography 'It's Only The Sister'.

But, at a time when Daphne was being faced with the unwelcome realities of life as an army Major's wife, Angela's world opened up as she became involved with a group of liberated women in Hampstead, including the actress Marda Vanne and writer Dodie Smith. Jane's writing gives us a fascinating insight into the life which could be lived by women outside the conventions of marriage and domesticity in the 1930s, if, of course, they had the means to support themselves. Once her father died, the grip of his Victorian values was loosened and Angela had a series of relationships with women frequently much older than herself.

Jeanne (Bird), the youngest, was favourite of her mother Muriel, a pretty child who became a painter, trained at the Central School of Arts and Crafts and increasingly involved in the artistic life of Cornwall. Of the three sisters, Jeanne's voice is mostly absent because, in writing this book, Jane was denied access to her letters by Jeanne's lifelong partner the poet Noel Welch. Like their mother Muriel, she often doesn't seem to have a presence of her own but is glimpsed in the writings and reactions of others.


This biography is richly illustrated with photographs from the du Maurier family album which track their lives as they grow with the century through the opulence of the twenties to the deprivations of war and beyond. As Jane explains in her preface, she doesn't seek to write a full biography of each sister, rather to consider them side by side as they lived in life. But this is a difficult balance to achieve and inevitably Daphne emerges as the fascinating but flawed leading character in this book. She often appears unlikable and cold in her relationships, yet is generous to a fault with her wealth in supporting family and friends, has written more than her siblings and had so much more written about her.


And, although the whole family fell in love with Fowey and lived there for many years, it was Daphne alone who became obsessed with nearby Menabilly, the run-down country house which provided inspiration for Manderley in Rebecca, her bestselling novel which became a chilling Hitchcock film.

It's fascinating to examine Daphne's character and work not only in the context of her two sisters but also her parents and the wider du Maurier clan. Although Jane does succeed in bringing Angela and to some extent Jeanne to life, it's through the prism of Daphne that this engaging, highly readable and thoroughly researched biography is at its most successful.


Images courtesy of the National Portrait Gallery, Getty Images and the BBC
Posted by Claire Thinking at 14:29