Chimerica at the Harold Pinter Theatre

Those of us around in 1989 will never forget the news images of a single white-shirted man standing in front of a column of tanks in Tienanmen Square. The Chinese equivalent of the Arab Spring was being rubbed out by the authorities and we held our collective breath, terrified we might be about to witness the crushing of this solitary figure by an overwhelming force. Rather than retreating from danger, he jumped into the tank's path as it tried to weave around him and scaled its sides to talk to the soldier within. We looked at him with renewed wonder. Who was this astonishing protester confronting the might of the Chinese army single-handed? What was motivating him and what could he be carrying in those two plastic shopping bags?

That now-iconic picture is the starting point for Lucy Kirkwood's epic new play Chimerica, a fictional account of what happens when American photo journalist Joe Schofield (played by Stephen Campbell Moore), who captured the event on film at the time, becomes obsessed in the present day with finding the answers to the enigma that is Tank Man. He enlists the support of fellow journalist Mel (Sean Gilder) and their editor Frank (Trevor Cooper) and flies to meet his Chinese contact and friend Zhang Lin (Benedict Wong). Along the way he becomes involved with Tess (Claudie Blakley), an English market analyst profiling the Chinese consumer for her credit card client. As Joe's investigation progresses the action switches seamlessly between China and America, between the present day and the events of June 1989. In the same way that Michael Frayn's Copenhagen explains the principles of quantum mechanics in simple terms to the scientifically challenged, Chimerica weaves the economic and political relationship between the two superpowers effortlessly into its narrative, so the dynamics are clear without it ever feeling preachy.

Chimerica is much more than an examination of Chinese and American interdependence though: at its core is a man's obsession and its impact in terms of human relationships. What begins as a work assignment with colleagues morphs into a lonely compulsion which Joe pursues despite the costs - to his nascent romance with Tess, his professional relationship with Mel and ultimately to the life and well-being of Zhang Lin, an English teacher with his own demons which are gradually uncovered during the course of the play. 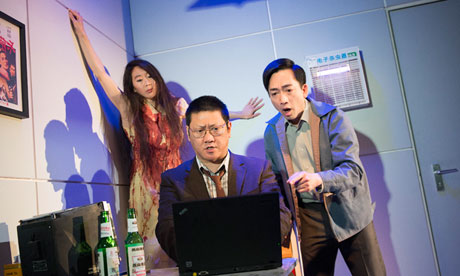 Lucy Kirkwood took six years to write Chimerica and her crafting is evident throughout. She explores the interdependence between China and America; the nature of money and power in both countries, the way it corrupts and the way it suppresses. In an era when we are learning much from whistle-blowers like Edward Snowden, Chimerica  demonstrates how this type of suppression is a two way street - there are no squeaky clean good guys here. Every character has their flaws and their own story which has changed them by the end of the evening and this is emphasised by superb acting from the cast. As well as the main protagonists, Andrew Leung deserves special mention playing both the young Zhang Lin and Benny. Apart from the first few moments, when I had difficulty tuning into some of the diction and speed, the dialogue is witty and sparkling, the action fast paced and incredibly slick.

Above all, this is quite simply sensational theatre, co-produced by Headlong, who are at the peak of their form at the moment, and the Almeida. Es Devlin's revolving set is breathtakingly clever - you can get a taster of its innovative design here as you see it under construction. The maelstrom of projection and lighting is exhilarating, the pace never slackens and the music is atmospheric. How much of this was envisaged by Lucy Kirkwood and how much created by director Lyndsey Turner and her team is something that intrigues me because I'd love to find out more about their collaborative process. But ultimately it's the story that gets you. There are many twists and turns along the way and, whether you witnessed the images in 1989 or not, Tank Man and the contents of those two plastic shopping bags will send shivers down your spine.

Chimerica is a Headlong and Almeida Theatre co-production which opened at the Almeida Theatre on 20th May 2013 and then at the Harold Pinter Theatre, London SW1 on 6th August 2013. Our seats were in the middle of the Royal Circle which gave us a good view. Chimerica is running for a limited season until 19th October 2013.
Posted by Claire Thinking at 13:44