Cheerful Weather for the Wedding

Let me admit something straight away; this is the first Persephone title I've read. But immediately I'm a convert to these beautifully produced works of art in their own right, by often forgotten, early twentieth century (mainly women) authors. 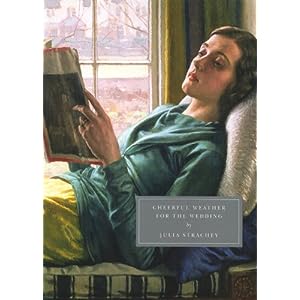 Cheerful Weather for the Wedding is by Julia Strachey, a member of the Bloomsbury group and contemporary of Virginia Woolf  whose Hogarth Press first published the book. Strachey is described in the introduction by her friend Frances Partridge as 'a misfit in life'; abandoned by her parents, twice married but with a string of love affairs in between.  I took this as a good sign, as misfits usually have the most interesting things to say - where's the story in conformity? Reading a little about her, I've found her writing compared to that of Virginia Woolf, Katherine Mansfield and Stella Gibbons amongst others.

Like Mrs Dalloway, the events in this novella take place over the span of a single day, opening with Dolly, the young bride-to-be, in the drawing room of her family's country home. After a short engagement, Dolly has agreed to go to South America with her groom in a transaction which seems bereft of much romance and holds her in a state of wistful semi-paralysis.

Strachey's writing often sparkles. She describes the house beautifully, giving a very particular sense of place. I loved her description of the ancient drawing room mirror

...rusted over with tiny specks by the hundred, and also the quicksilver at the back had become blackened in the course of ages, so that the drawing room, as reflected in its corpse-like face, seemed forever swimming in an eerie, dead-looking metallic twilight, such as is never experienced in the actual world outside.'


I read a quote some time ago in the Wit & Wisdom section of The Week (and I'm afraid I've forgotten the attribution) that a parent is only as happy as their saddest child. On this basis Dolly's mother, Mrs Thatcham has had some sort of maternal bypass (or perhaps more likely doesn't share our early 21st century sensibilities) as, immune to her daughter's foreboding, she wraps herself up in the organisation of the day, which she nevertheless often gets wrong. Fortunately, the servants are on hand to take the blame for her shortcomings, as wedding guests begin to arrive at the house. Dolly's school boy cousin Tom is determined his younger brother Robert should change his emerald green socks for something more suited to the occasion, but Robert is equally determined he will not - a quarrel which threads itself entertainingly through the narrative. Amongst the cast of bridesmaids, elderly aunts, children and the Canon who will be conducting the ceremony is Joseph, who emerges as the real object of Dolly's affections but seems disinclined to do anything about it, at least until it's too late.

Dolly resorts to the bottle and descends into drunkenness upstairs and the guests downstairs tuck into a rather chaotic pre-wedding lunch. As ceremony approaches and the story of the day unfolds, Strachey portrays her characters with great authenticity and detail and yet their potential is never fully explored and they often remain irritatingly two dimensional.

I almost liked Cheerful Weather for the Wedding very much. Strachey is an accomplished writer and I certainly found her much more accessible than Woolf. The novella has some gloriously comedic moments and hints at underlying darkness, but in the end I found it just too slight and the story I was looking for was not quite the one that was written. There is a tale with much greater depth lurking behind its facade, and to turn it into a successful film I think this will have needed to be unearthed. I'd be intrigued to discover if it has.


This review is part of a group readalong organized by Simon at Stuck in a Book, more reviews and comments can be found here
Posted by Claire Thinking at 19:06