The Flame Trees of Thika by Elspeth Huxley

The Flame Trees of Thika by Elspeth Huxley is an evocative memoir of an age long gone, before the onset of the First World War, when Kenya was known as British East Africa. 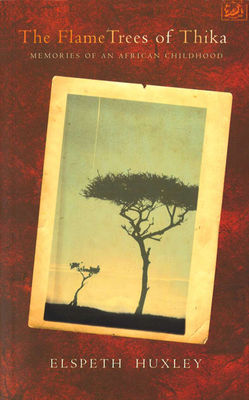 The country is largely uncultivated except by the indigenous 'savages' whom the British believe it is their duty to civilise. The writer as a little girl sets forth from Nairobi with her parents, Robin and Tilly, to start a coffee farm on what is on the map


five hundred acres of blank space with a wriggling line, presumed to be a river, on each side.

The land Robin has bought with the money he had left from various other failed ventures, was previously known for game hunting, with big cats being shot on sight and bagged for their valuable skins. Robin is buoyed by the optimism of a new venture, but Tilly is more pragmatic, having already lost many of her personal possessions in the settling of her husband's various debts. Of Robin building a house ready for the arrival of his wife and daughter she says simply,


'I only hope that if he builds one, he will do so on the right farm'

But Tilly likes a project and isn't easily daunted, even though there is no house when they arrive, and the native Kikuyu tribe are not nearly as co-operative as she was initially led to believe. Within a few days, a rudimentary grass dwelling has been constructed and land is beginning to be cleared for the planting.

Elspeth is a solitary child in this world of adults, as most children of her class are being educated at boarding schools back home in England. But this simply isn't an option for her until her parents begin to make their fortune from coffee, something which is mentioned regularly but appears more and more remote as progress is obstructed at every turn. Her life is full of privations, from insect bites to the threat of attack by wild animals or tribes perpetually on the brink of war with each other.

Nevertheless, although Elspeth's formal education is haphazard, the world she describes through her child's-eye observations is magical and informally she is gleaning so much more than her boarding school contemporaries could ever imagine. In our book group, we wondered how much Elspeth would have understood at the time and how much she filled in later from a more mature perspective, but this really doesn't detract from the story. The fellow settlers, both British and Boer, are particularly fascinating, especially attractive young Lettice Palmer who arrives with her very proper ex-soldier husband Hereward, but is soon revealed to be facing a dilemma of her own.

Through grit, determination and many adventures, Tilly and Robin establish themselves on the farm, but everything they have worked for is threatened by the approach of war. Reading this later part of the book brought to mind one of my favourite poems by Philip Larkin MCMXIV (1914) because they both so vividly evoke an era on the cusp of change, when Britain was still an empire but its days were severely numbered.

Larkin's poem describes those 'long uneven lines' of men waiting to enlist, with their

and this is reflected in the enthusiasm of the men in British East Africa, both white and black, as they race to sign up, afraid of missing out on all the fun. At first it is thought the fighting will be over quickly and life can return to normal, but as Robin and Tilly are caught up in the war effort, Elspeth is sent away from Thika and its burgeoning flame trees to stay with family friends. Gradually it becomes clear that the battle will not easily be won and nothing will ever be the same; in the words of Larkin, 'never such innocence again.'
Posted by Claire Thinking at 16:47