So, we had a wonderful theatrical experience yesterday, my family and I. We drove to Stratford-on-Avon as a half-term treat, to see a matinee of The Winter's Tale at the RSC. This was no ordinary show but a unique performance, where those understudying for the principal players had the opportunity to show what they could do. But the whole ensemble was included, so this also meant that the likes of leading actors Tara Fitzgerald and Jo Stone-Fewings were involved in taking on some of the lesser parts.

The Winter's Tale, one of my bucket list of Shakespeare plays I'd yet to see, is a story of the destructive force of jealousy and yet is classed as one of Shakespeare's comedies (although sometimes also viewed as one of his 'problem plays'). In the opening scene, Leontes (Ben Whybrow), King of  Sicilia, is begging his life-long friend Polixenes (Daniel Millar), King of Bohemia, to extend his stay. Leontes' petition is unsuccessful, but his pregnant wife, Hermione (Bethan Walker) is more persuasive and this, together with witnessing their friendly kiss, is enough to convince Leontes of his wife's betrayal, that she is having an affair with Polixenes and is bearing his child. He orders that Polixenes should be poisoned, Hermione thrown into prison and the daughter born shortly thereafter abandoned on a foreign shore.

The first acts portray the descent from an affluent Pre-Raphaelite idyll of Sicilia at the play's opening to a darker place where bellies-with-child are punched without redress, until we are finally washed up on the shores of storm-lashed Bohemia. Lucy Bailey's production separates Sicilia from Bohemia by class rather than country, focusing on the divisions suggested by the text of the play, although how Bohemia serves as a Victorian industrial powerhouse for Sicilia when it consists mainly of frolicking shepherds isn't entirely clear.

Prior to seeing this production, I'd read a couple of reviews which were quite critical of the set and lighting, suggesting they were a distraction from the actors and that Bailey had focused on style over substance. I didn't find this so; the changing seascape was evocative without being overwhelming and the tower (although it didn't seem all that ivory-like, I only picked this up from the programme notes) introduced a dynamism quite welcome after so much exposition. It was also an effective means of demonstrating Leontes' isolation from the society he had so arbitrarily rejected.

The final acts are altogether a lighter affair, set in Bohemia some sixteen years later. Leontes' abandoned daughter Perdita (Bethan Walker/Emma Noakes sharing) has been adopted by an old shepherd and brought up in a rural setting of clog dancing, pick-pocketing and partying like there's no tomorrow. Prince Florizel (Andrew Hanratty), son of Polixenes, has fallen in love with her but, because of her perceived lowly birth, there are problems ahead, embodied by the unreasoning rage exhibited by Polixenes, but relieved by the superbly comic interventions of the peddler Autolycus (Duncan Wisbey). 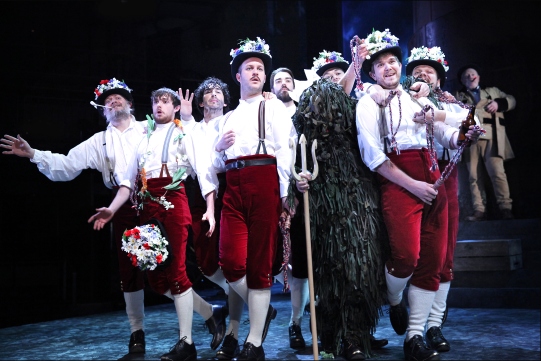 Theatre is created anew at every performance and nothing can reinforce this so vehemently as an understudy run. This is a chance for the up and coming to impress and progress, and so it is exceptionally exciting to watch. Here and there were a few fluffed lines, but in the circumstances, it seems quite picky to mention them. I had my doubts about Ben Whybrow as Leontes at the beginning but he seemed to grow into the role. Bethan Walker was outstanding as Hermione (and sometimes Perdita) with not a whiff of the understudy about her -  she is surely destined for more leading roles. I hope all the understudies took as much from the experience as we did from being in the audience.

(Original cast images courtesy of the RSC)
Posted by Claire Thinking at 12:14