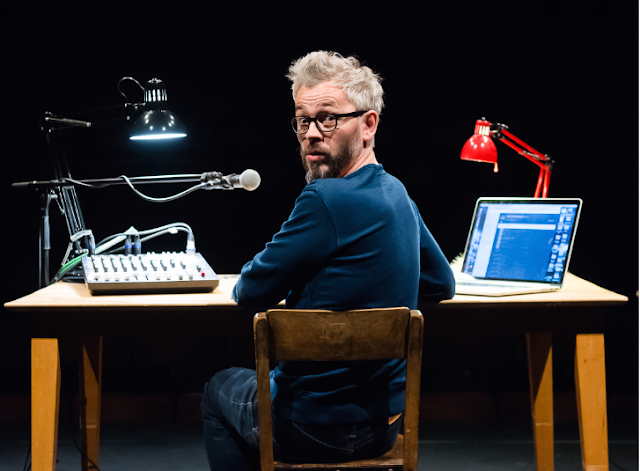 Rather than taking on an alter ego, Hoipolloi’s Shôn Dale-Jones is keen to emphasise he’s being himself in The Duke. And indeed, his hour of one-man storytelling feels very personal: a funny, heart-warming and poignant blend of real and imaginary events.

It’s a deceptively complex and contemporary tale that belies the fluency of its recounting to gnaw away at the relative values we ascribe to life and art, not only in financial but emotional terms as well. It’s also perfectly suited to the intimate space of the Tobacco Factory’s newly opened Spielman Theatre.

Shôn’s central thread is of a family heirloom, a Royal Worcester porcelain statue of the Duke of Wellington that his Dad bought as an investment in 1974 and kept under his bed, wrapped in sponge, to gradually increase in worth. After her husband’s death, while Shôn is working on a breakthrough film script, his mum calls him in disarray from Anglesey, to tell him that she’s accidentally broken The Duke.

Pushing aside a fast-approaching deadline for revisions that will tear the soul out of his script but mean his work might get financed, Shôn embarks on a mission to track down a replacement statue. But current events keep intruding into his consciousness; taking in the charity shops of his home town of Cambridge, he and his mother meet a refugee family—a mother of two young children whose husband has been left behind.

Seated at a desk, choreographing his own music and sound effects from his laptop, Shôn weaves these disparate strands together into a fantastical road trip to Anglesey. His mother, his film script and the refugee crisis all vie for his attention. You may never quite know how far real events are overtaken by inventiveness, but there’s a playful sense of which way the scales are tipping.

Though Shôn’s been touring this show since August 2016, he wasn’t the same man he was a year ago or will be in a year’s time, he says. He has the knack of drawing the world closer; alongside family, the political becomes personal, too. Sadly, the refugee crisis remains as pertinent as ever, but rather than dwell in guilt, he’s been doing something about it. Since he began, The Duke has raised nearly £50,000 for child refugees.

The Duke is an antidote to our divided times, emphasising connection and kindness. Told with charismatic wit and warmth it delivers an enduring message with the lightest of touches, that even if you can’t solve everything for everybody, it’s still possible to give what you can.
Reviewed on 30 October 2018 | Image: Brian Roberts
Posted by Claire Thinking at 17:01