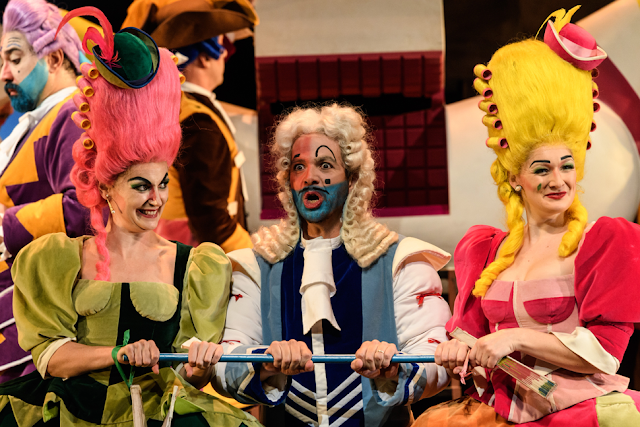 WNO brings two heroines of diverging fortunes to Bristol this season; the tragic decline seen at the core of Verdi’s La traviata in stark contrast to the lighter-hearted triumph of virtue over greed in Rossini’s La Cenerentola.

First staged in Rome in 1817, this dramma giocoso of the Cinderella story may be missing the now familiar pumpkins and glass slippers but has a refreshingly assertive heroine who knows her own mind.

At the ball, Rossini’s Cinderella rejects the advances of the man she believes to be Prince in favour of the valet she has loved from the first. Rather than capitulate when his identity is revealed, she challenges her lover to recognise and still want her when she is dressed once again in rags. And, reflecting on her own good fortune, she generously forgives the selfish shortcomings of others who have shown her nothing but scorn.

It’s an essentially moral tale that combines the romantic arias of love at first sight with larger than life characters and a rousing male ensemble. WNO’s revival of Joan Font’s production, initially performed in 2007 and here directed by Xevi Dorca, plays it for full pantomime appeal. Designer Joan Guillén’s inventively visual spectacle is awash with primary colours: characters are robed in extravagantly lofty wigs and exaggerated silhouettes while dancing mice scuttle around the stage, a cross between teasing Greek chorus and scenery shifters. Though they have the potential to irritate, by the final curtain these velveteen rodents prove more endearing than distracting.

While there may be little subtlety in the setting, Tara Erraught’s central performance is full of confident nuance. A beguiling Angelina, she is as strong and fiery as she is loving and kind. Her mezzo is clear and controlled, mastering the difficult libretto with warm and silky tones. This Angelina endures the knocks of domestic servitude, but still dares to dream. Yet, while she takes a girlish delight in her transformation from rags to riches, her feet remain firmly on the ground. Happily-ever-after only comes to fruition here on Cinderella’s terms.

Aoife Miskelly and Heather Lowe combine strong vocal fluency with comic acting verve to form a magnificently vile double act as Clorinda and Tisbe, Cinderella’s self-regarding ugly sisters. Fabio Capitanucci as her indolent and gluttonous step-father Don Magnifico completes the despicable trio. These two-dimensional characters take such cartoonish delight in advancing their own cause that you could begin to boo them from the audience.

Matteo Macchioni brings a romantic dash to the role of Don Ramiro, rich and tender in his first act duet with Angelina. Yet at times he is in danger of being upstaged and over-sung by Giorgio Caoduro’s animated Dandini, the valet who relishes his role as the stand-in Prince a little too much.

Though the tempo is inclined to be fast-paced in some of the more reflective moments, Tomáš Hanus conducts with a flamboyance attuned to the greater part of the work, and WNO’s orchestra is as assured as ever. When the chorus of the Prince’s male attendants fills the stage, whether with pomp and ceremony or drinking revelry, it breathes life and exuberance into the scene.

It’s the apogee of a production that may lack some of the structural light and shade required by Rossini purists but is always full of sparkle.