Theatre Review: Living with the Lights On at Tobacco Factory Theatres, Bristol 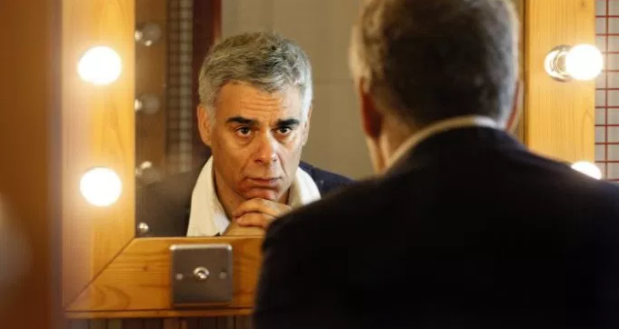 Mark Lockyer portrayed a convincingly complex Iago in the Tobacco Factory’s Othello earlier this year, unleashing the dark and destructive forces of a master manipulator on those most deserving of his loyalty. Now he returns to the Factory Theatre in his one-man show Living with the Lights On, recounting his own personal encounter with the Devil in a performance of unflinching, soul-baring honesty.
In this Actors Touring Company production, Lockyer welcomes his audience into the theatre with disarming ease – offering the tea and Hobnobs of a typical village hall gathering. There isn’t any barrier or theatrical artifice – the lights, quite literally, are always on. He sets the scene with humour and pathos, but mental illness isn’t cosy or inclusive. His story soon turns to the very public breakdown he experienced as Mercutio in a performance of the Royal Shakespeare Company’s Romeo and Juliet.

Under Ramin Gray’s nimble direction, Lockyer’s delivery switches from manic intensity when meeting the Devil – who is bizarrely dressed as a Californian beach boy – on a country walk near Stratford, running amok on the RSC stage and being unfaithful to his long-term girlfriend, to moments of quieter reflection on the consequences of his actions. He deftly characterizes those he loves or meets along the way – his mother, the doctors and the RSC landlord who frowns at the pizza boxes and saucers of ‘Holy water’ he has strewn around his bedroom.

As the tale of his disintegration continues, the moments of lucidity become fewer. His actions spiral into self-destruction and a reckless relationship with a can of petrol. Lockyer maps out the all-consuming suffering of his existence with such clarity that at times it’s difficult to keep watching. Most remarkable, but sadly not surprising, is how lightly his plight is brushed aside by the authorities; not only missing the clues but actively looking away, as he is sent home alone from hospital after a stomach pumping because there are no beds available.

It’s a cathartic, compelling 80-minute bombardment of pain, leavened by Lockyer’s flashes of bleak and self-deprecating humour. After descending into the depths of hell, the help he was crying out for is eventually at hand and he begins to find a path back to his former life. If it seems miraculous that Lockyer is now back on stage, this clearly took years of small steps to recovery that are summarised a little too quickly. Perhaps this is because these steps are still being taken and this show is a part of that. As a one-man embodiment of the fall from the precipice of sanity, it’s a courageous and insightful reminder of how close we all live to the edge.

Posted by Claire Thinking at 19:15

Email ThisBlogThis!Share to TwitterShare to FacebookShare to Pinterest
Labels: Bristol, Living with the Lights On, Mark Lockyer, Tobacco Factory Theatres