Readers of this blog may know I've reviewed several novels by Ragnar Jonasson in the Dark Iceland series, translated by Quentin Bates and published by Orenda Books. My review of his latest book Rupture can be found here.

Jonasson's novels are set in Siglufjördur in the far north of Iceland; a remote town of atmospheric winter darkness. Now from the same independent publishing and translating stable comes another Icelandic author, Lilja Sigurdardottir, whose thriller plays out primarily in the country's bustling capital, Reykjavik. 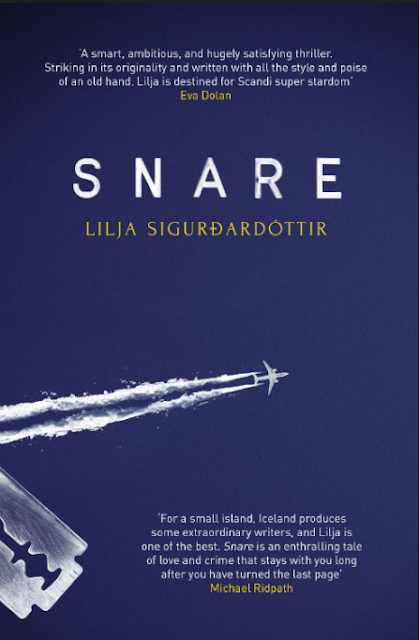 Both authors examine Icelandic society at a pivotal time, after the banking crash that devastated the country and the catastrophic eruption of the Eyjafjallajokull volcano. Snare begins in November 2010; there's the taste of ash in the air and many lives are in turmoil.One of these is Sonja's, victim of an acrimonious divorce, now caught in a net of cocaine smuggling as a mean of supporting herself and battling for custody of her young son, Tomas.

Sonja is the novel's central character and, despite her morally questionable occupation, Sigurdardottir makes it easy to identify with her. Sonja's back is against the wall; she's renting a shabby apartment and just about making ends meet. Her ex-husband Adam seems to hold all the cards and Tomas' well-being is threatened by the ruthless drug dealers who keep her smuggling to ensure her son's safety. Her choices are limited; Sonja is truly caught in a snare.

To complicate matters further, Sonja is in a relationship with a woman, Agla, a high-level bank executive embroiled in the fallout of the financial crash. Agla has her own professional connection to Adam and her own demons to battle. Unlike Sonja, Agla refuses to acknowledge her sexuality and, despite her obvious desire, resists taking their relationship to a deeper level.

As the pressure builds for Sonja, she begins to attract the attention of seasoned customs officer Bragi at the country's international airport. Forced into carrying ever bigger consignments, Sonja's meticulous planning begins to unravel and Bragi closes in. Sonja attempts to wriggle free from the trap that ensnares her, but in doing so, puts herself and her son at ever greater risk.

Lilja Sigurdardottir has written a taut, tense and highly engaging thriller that delivers characters you care about - precisely because they have been backed into a corner.

She delivers several twists - some anticipated and others a genuine surprise. As Snare is the first of a trilogy, Sigurdardottir necessarily leaves some threads undone - which can be frustrating if you're looking for neat resolution. But if, like me, you've become invested in the characters and want to know what will happen to them, there's an impatient pleasure in anticipating the next compelling episode in this series.

Snare by Lilja Sigurdardottir is published by Orenda Books, many thanks to the publishers for my review copy.
Posted by Claire Thinking at 00:25