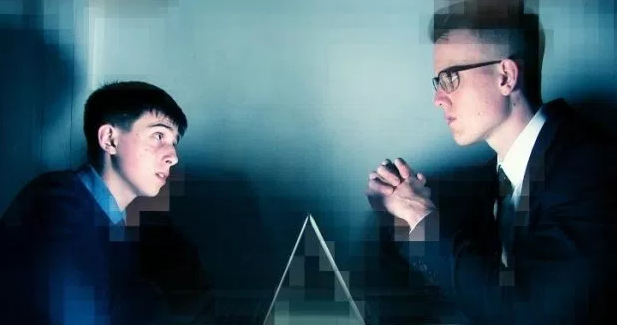 There’s a nostalgia to the opening of TopButton Theatre’s debut production Wink as video images from a previous decade, of two young boys and their families enjoying birthday treats, flitter across the central projection screen.

Phoebe Eclair-Powell’s funny and intelligent dissection of the perils of negotiating online and offline relationships teeters at the boundaries of credibility plot-wise but sharply draws together its disparate strands into an affecting resolution. Mark (Gabriel Howell), having recently lost his father, idolises his French teacher John (Matt Harwood) and searches him out on Facebook. There Mark finds he can reinvent his own online identity and make a connection through the unlocked profile of John’s long-term partner Claire that has consequences far beyond his initial intentions.

In this exploration of modern-day male identity, both Mark and John are misfits in the world they inhabit. Mark, burdened by unspoken grief, only has his place in the school thanks to a sports scholarship. John approaches his job with a cynicism that papers over the cracks of his own insecurities, while casually cheating on Claire – often using text exchanges with one lover to fuel his passion for the other, all the while doubting the feelings and fidelity of both.

Faye Elvin’s direction brings strength and purpose to the piece, particularly in the sections of fast-paced, choreographed physicality as the actions of these two young men’s trajectories collide. A padded office chair is pivotal: propelled around the stage, connecting home with school, exchanging ownership as John and Mark’s fractured stories overlap and foreshadow each other. There’s neat use of projected images to communicate online screens and absent characters and an effectively integrated sound design, all by Harry Jerome.

In the tumult of words, some clarity of dialogue is occasionally lost, especially in the opening sequences. Aside from this, both Howell and Harwood are totally convincing and engaging in their portrayals of young men confused by the complexities of life where so much is available at the touch of a button: searching for identity both online and off, envying the outside of other people’s lives while struggling with the inside of their own.

TopButton’s stated mission is to promote discussion around subject areas that are often neglected, such as men’s mental health, indeed in developing this project they have worked with the charities Mind and Dyslexia in Action. This layered and thought-provoking production of Wink proves they are off to a very promising start.

Posted by Claire Thinking at 13:26