This review was originally written for The Public Reviews 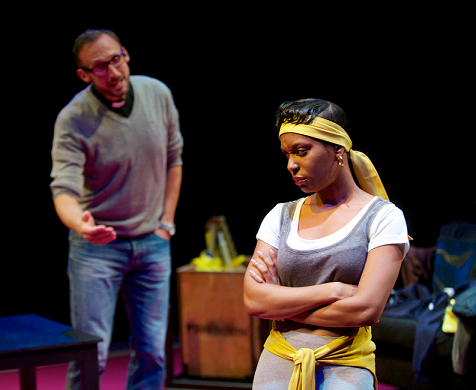 The concept of five short plays combining in no fixed order is an intriguing one, given the 120 possible permutations that could be performed, with a running order decided each time by a pre-show lottery. It holds the promise of theatre extending what it already does best – building performance anew every night – and evens up the balance; a different audience, a different dramatic interpretation.
And so Roundelay commences its unique rotation; in the event, no doubt with a nod to trimming the overall running time, only four out of the five possible plays are performed here on the night. Each stands alone in its moment in time, but the characters and narratives are inter-connected. Thus the judge trying to recreate his dead wife with a young escort in one play reappears as the father of a disturbed novelist in another and the aspiring actress, mistaking the dubious nature of the work her new agent is offering her, tries to audition in the next with a monologue from Chekhov’s The Seagull.
This is achingly Ayckbourn-funny stuff at times, still full of the confused identities and sharp one liners which characterise his best creations. It is by turns comedic, charming, poignant, clever and a
little bit (but never too) disturbing. In this his 78th play, visiting Bath from his home theatre the Stephen Joseph in Scarborough, Alan Ayckbourn shows he hasn't lost any of the zest for experimenting with new form which marks out previous works such as Sisterly Feelings, where a coin is flipped at the end of one scene to determine what comes next, or the multiple perspectives of The Norman Conquests.


Despite this experimentation with structure, and references to the internet and social media, the content and staging show a distinct preference for the traditional. Suggested themes of identity and reaching out for human relationship are hinted at touchingly but can never be fully explored by this fragmented portrayal. Genres swerve from farce to thriller and, inevitably, this can result in an unevenness which doesn't always quite gel.

Yet there are still convincingly strong characterisations; Sarah Stanley is both chilling and amusingly batty as the somewhat deranged Blanche, whilst Krystle Hylton excels as feisty Roz, the sixteen year old who knows she should be a star. Richard Stacey is admirable as Russ, the self-effacing vicar who will never be bishop, obsessed with Gale (Elizabeth Boag), his first love turned questionable actress and agent.
Could Roundelay be more of a buzz to keep the cast and crew on their toes, than for the audience, the majority of whom will only ever get to see it once? Can a series of transposed plays ever build towards a compelling conclusion? These are the questions hovering in my mind before the show begins. Yet afterwards, I find myself reassured by how well the four short plays do sit together overall, musing about how they might work in a different order, and pondering over what has been lost with the fifth – on any one night unseen – instalment.

Posted by Claire Thinking at 12:54