Kazuo Ishiguro is already in the news this year with The Buried Giant, his first novel in a decade, due out this spring. He'll be talking about it at the Bath Literature Festival on 6th March 2015; set in a mythical post-Roman Britain, it sounds intriguingly different from his other books. Ishiguro won The Man Booker Prize for The Remains of the Day back in 1989, when it was still simply known as The Booker. And he's been nominated three more times.

One of these nominations was in 2005 for Never Let Me Go. My guest reviewer (and younger daughter) Imogen Hayes, first saw this as the 2010 film starring Carey Mulligan, Andrew Garfield and Keira Knightley.

She loved the film but, inspired to read the book, declared it even better. That's my girl...and here's the review she wrote for her English Literature AS level.* 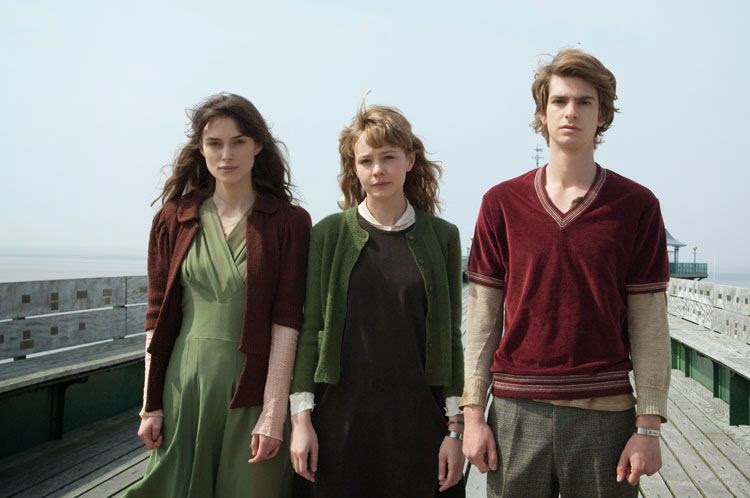 Children of Hailsham House must take extreme care of their health, produce extensive collections of artwork and never stray outside its borders. Like other children, they are frightened of the woods and grow excited at the thought of jumble sales. Yet they have no surnames, parents or family history; only guardians to serve as parental figures. This is why in the enclosed world of Kazuo Ishiguro’s dystopian novel, friends are all that Hailsham students have in their lives. Unlike other children, their existence has a single focus; a sole dark and disturbing purpose.

Ishiguro’s previous novels have won him international acclaim and many honours including the Booker Prize, the Whitbread Book of the Year Award and an OBE for services to literature. Never Let Me Go is his sixth novel, set in an alternative version of late 1990s England, where Kathy H, Tommy D and Ruth are students of Hailsham, desperately seeking to discover more about their strange world.

Narrated by Kathy, the story of her early life is told in a fragmented series of memories. She recalls her Hailsham days fondly and in astonishingly minute detail; the secret pathways, snatches of overheard conversation between guardians and the secluded pond where she and Tommy would puzzle over the purpose of ‘The Gallery’. In the present day Kathy is a Carer. She reflects on her memories with retrospective wisdom, as she attempts to answer troubling questions about her existence and gain solace in the past, clinging to the memories of her loved ones.

Kathy, Tommy, Ruth and their peers live in a state of limbo after leaving the sanctity of Hailsham for The Cottages, when it is only a matter of time before they must begin to make their troubling ‘donations’. It is here that the closely intertwined relationship between the three friends becomes more complex. This is their first experience with the outside world and Kathy records it with an observant eye, watching as Ruth childishly endeavours to impress older, more experienced housemates, or Veterans, from other estates; copying their mannerisms, second-hand from the cheesy American sitcoms they watch on television.

During this time Kathy, Tommy and Ruth are free to roam deep into the countryside and travel into the town, where they tentatively interact with people from the outside world, so-called ‘Originals’. They are strangely disconnected from the society that created them, where people know the real cost of their advanced healthcare, but neglect to speak about it. In this way, Ishiguro holds up a bleak mirror to humanity, reflecting on how far we are willing to go to preserve human life, no matter how questionable the ethics may be. Perhaps Never Let Me Go is not dystopian fiction, depicting a distant corrupted future; but is just an extension of our existing society, not so far from reality.

Ishiguro’s writing is clever and powerfully moving, without sentimentality or manipulation of the reader’s feelings. As their time at The Cottages comes to a close, the friends face being torn apart in an uncertain future, as Kathy comments


It never occurred to me that our lives, until then so closely interwoven, could unravel and separate.

Kathy’s chance to experience the love and happiness she craved for her entire life is tainted by the fear that it has all been left too late. Though her hope is constantly being eroded, she refuses to pity herself, as she discovers and accepts the purpose of her existence. Ishiguro’s refusal to back up the plot with scientific plausibility allows the reader to focus solely on the lives of the characters and their emotions, and to view the natural human life span in a de-familiarised sense.

Never Let Me Go is published in paperback (304 pp) by Faber & Faber.