Chimamanda Ngozi Adichie is already a force to be reckoned with in contemporary African literature, her work focusing an unblinkered gaze on her native Nigeria. Like a mother with an errant child, she knows her country inside out, well aware of its faults and failures but loving it nonetheless. Having lapped up her previous two novels and read a raft of glowing reviews for her latest, the 2014 Baileys Prize-shortlisted Americanah, there seemed little likelihood that I wouldn't enjoy it.

Ifemelu and Obinze meet as teenagers in a Lagos school. To stay together, they choose the same university in Nsukka, but Nigeria's military dictatorship is falling apart and extended strikes jeopardise their education. Ifemelu grasps her opportunity to study in America but events conspire to keep Obinze away. While she sinks beneath the weight of her immigrant status and the lengths she has to go to for rent money, he must settle for attempting a new life in Britain instead.

At its heart, Americanah is a tender love story, beginning in adolescence


she liked that he wore their relationship so boldly, like a brightly coloured shirt. Sometimes she worried that she was too happy. She would sink into moodiness or snap at Obinze, or be distant. And her joy would become a restless thing, flapping its wings inside her, as though looking for an opening to fly away.

It's a vital young bond which nevertheless struggles to survive once Ifemelu and Obinze are continents apart. With Adichie there's always more than one dimension, and in Americanah her writing develops into an examination of the immigrant experience. So deeply perceptive is she and her characters so vividly portrayed, that you become more than just involved, you find yourself inhabiting them


She woke up torpid each morning, slowed by sadness, frightened by the endless stretch of day that lay ahead. Everything had thickened. She was swallowed, lost in a viscous haze, shrouded in a soup of nothingness. Between her and what she should feel, there was a gap.

As Ifemelu struggles on the edge of society, alienated yet clear-sighted, she observes differences of race and identity, regarding herself as black for the first time. In America, she envies others their ease, watching her friend Ginika


There were codes Ginika knew, ways of being that she had mastered...Ginika had come to America with the flexibility and fluidness of youth, the cultural clues had seeped into her skin and now she went bowling, and knew what Tobey Maguire was about, and found double dipping gross.

At the beginning of the novel, Ifemelu travels to a New Jersey salon to have her hair braided, an act representative of the themes Adichie is about to explode. Why should African hair so often be deemed unacceptable in its natural state and why does Ifemelu have to travel from tranquil, affluent Princeton into the depths of Trenton to find a place where it can be braided?

Of Igbo descent, it's only in America that Ifemelu becomes acutely aware of the distinction between tribes. Her observations are often wryly amusing, noticing the lengths many Americans take to avoid describing a person by their colour and their assumption that the foreign poor are all equally blameless and somehow canonised by their poverty. She starts an outspoken, often tongue-in-cheek blog about race and its hierarchy, the 'slippery layers of meaning that eluded her'. 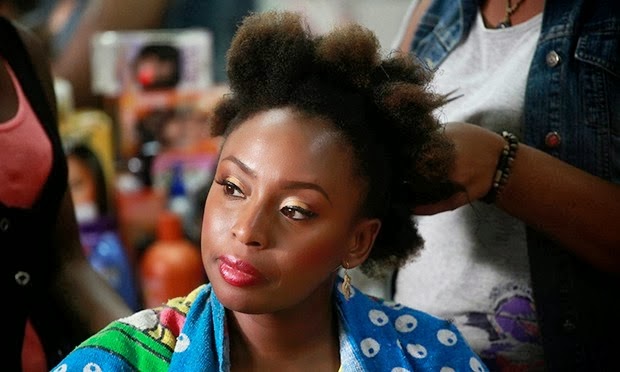 Adichie could write about the contents of your sock drawer and make them fascinating and in Americanah she mines a rich seam with every act, every sentence full of nuance. Switching back and forth between Ifemelu's present and her past in Nigeria, the two eventually merge as she's drawn back to a homeland at once familiar and strange, where Obinze is now living the life of a successful, married businessman.

This is an incisive, often funny and always ambitious book. If, at times, I found it harder to recognise Obinze's snapshot of Britain, this is likely because my own experiences are very different to his. Americanah must be a very strong contender to win The Baileys Prize because to read it is so much more than simple enjoyment; it's an immersive phenomenon which leaves you with a sense of bereavement when you're forced, kicking and screaming, to put it down.


Americanah is published in paperback in Great Britain by Fourth Estate. The winner of the Baileys Women's Prize for Fiction 2014 will be announced on June 4th.

Photo of Americanah courtesy of Waterstones.

Posted by Claire Thinking at 15:10