Destined to be an Old Woman with No Regrets

It's high time I had another guest blog and my friend Liz has kindly obliged. Liz recently sent me a birthday card with the message

So, this is for all 'women of a certain age' and includes Liz's comments on Alan Chedzoy’s biography A Scandalous Woman: The Story of Caroline Norton.

Destined to be an Old Woman with No Regrets...


Most women I know are smart, intelligent, sassy, fun to be with, loyal, generous, self-deprecating and full of hidden depth. But viewed ‘en masse’, as ‘women of a certain age’, they are too often dismissed, seen as being of no consequence. As Mary Portas pointed out, even clothes manufacturers ignore this cohort, thinking that beige cardigans and shapeless frumpy sacks are enough to satisfy this invisible group.

But peel away the layers, get to know each of these women individually and I challenge anyone, male or female, young or old, not to be impressed by what you find.

On holiday last year I suddenly found myself amongst a group of middle-aged, single women and I confess I felt really out of place at first, being at least ten years younger than most of them. Following a guide who held the obligatory flag aloft, through the streets of a quaint Spanish town, I could see the look of horror on the faces of the motorists who were forced to sit and wait as the group trundled over the pedestrian crossing.  In every conceivable shape and size. At a variety of speeds. What a sight! And horror of horrors, I was part of that group! I was surrounded by sensible walking sandals, emergency brollies (despite blue skies as far as the eye could see), flowery sunhats and the smell of rigorously applied suntan lotion. I kept imagining the looks of amusement that would be on the faces of my 21 year old son or my work colleagues, all far more accustomed to seeing me lead the way, resplendent in suit and high heels, brandishing a smart brief case, with iphone held self-importantly to my ear.

Yet every one of those women had a story to tell. Of loss, grief, cruel twists of fate, betrayal, loneliness, illness, missed chances, regrets. Of happiness, success in the face of adversity, personal triumphs, examples of love for family and friends. Whatever their stories, each had grown stronger as a result of their experiences, ‘pulled up their socks’ and were now enjoying life to the full. Truly, what doesn't kill you makes you stronger. Most appeared to have two or three holidays a year and partook in such a huge variety of activities between them, that they left me feeling quite breathless. Although still worrying about their grown up children and grandchildren, they were not prepared to ‘conform’ to their beige stereotype and sit indoors, accepting the passing of time. No, every second was being well and truly made to count.

The author Philippa Gregory amongst others has shown us that there have always been strong women in our history, but their voices weren't recorded. In reality, their stories are often the most interesting and influence our lives in ways we are unaware of. I would urge you to read Alan Chedzoy's biography of Caroline Norton who I confess I had never heard of until listening to an article about her on the BBC World Service. 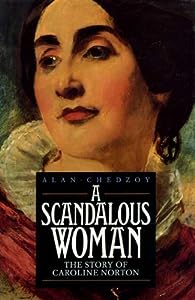 Caroline, the granddaughter of Richard Sheridan, was well-educated and well-connected and became a successful novelist, reviewer and poet in her own right. She was a formidable woman who didn't fit the stereotypical ideal of beauty in 19th century England, but her strong personality, sharp intellect and flirtatious manner made her alluring to the powerful men of Victorian society. In 1827, aged nineteen, she married George Norton, six years her senior. However, her close relationship with Lord Melbourne, the Prime Minister, led to her husband accusing her of committing adultery and to a court case which threatened the government of the day. Although the jury found her not guilty, the scandal never left her. George, a Tory MP and magistrate, was a violent man who beat her and exploited his position within the laws as they stood at that time, laws which did not recognise a married woman as a legal entity in her own right.

He was thus able to legitimately deprive Caroline of access to her children and take her earnings from her writing. Driven by the need to see her children, Caroline brought about changes to the British justice system. She used her connections in Parliament and wrote well argued and researched pamphlets and papers, until she succeeded in influencing public opinion to the extent that her campaigning led to the first piece of feminist legislation – the Infant Custody Act of 1839, prior to which time a woman had no right to see her own children if her husband took them from her. Her subsequent campaigning led to the first Divorce Act of 1857 and the Married Women’s Property Act of 1870, which made women a separate legal entity for the first time. Her story is heartbreaking and will make you cry, but her courage to fight on despite all that she had to endure, is inspirational. We should have been taught about her in school alongside Disraeli and Gladstone of the same period. Surely her contribution to our history is of no less importance.

When younger, I used to feel sorry for people who were on their own, sitting in a cafe with a cup of coffee and a book, terrified that would happen to me. Now I realise that to reach the stage where you not only feel confident enough to go out on your own, but actually want to do so and feel contented in that moment, is a wonderful place to be.

I've now met so many of my contemporaries who are happy with their place in society and what they bring to it. I just wish that the rest of society would place the same value on them as individuals. Let us all stop seeing a mass of middle-aged women, and instead see the individuals and value them. Not everyone can be a Caroline Norton, but in their own way, big or small, each will have made (and will continue to do so) a huge contribution to those around them and to society as a whole. 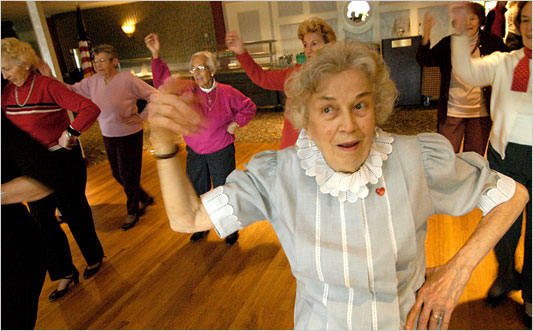 And I, as one of this age group, intend to keep on pushing the boundaries, working through my ‘Bucket List’ and am absolutely determined to be an old woman with no regrets – no matter what my son thinks of me!

Guest blog by Elizabeth Green.
Image of old ladies dancing courtesy of NYTimes and Mary Portas courtesy of the Telegraph.
Alan Chedzoy's A Scandalous Woman: The Story of Caroline Norton is published by Allison & Busby, London.

Posted by Claire Thinking at 15:03