Loung Ung's First They Killed My Father was testimony to an unimaginably harrowing childhood, lived under the Khmer Rouge in the 1970s, when an estimated two million Cambodians (a quarter of the country's population) were killed by this brutal regime.

Loung was one of the survivors and in her sequel Lucky Child describes the next chapter of her life, as she leaves her refugee camp in Thailand with eldest brother Meng and his wife Eang, destined for a fresh start in America. 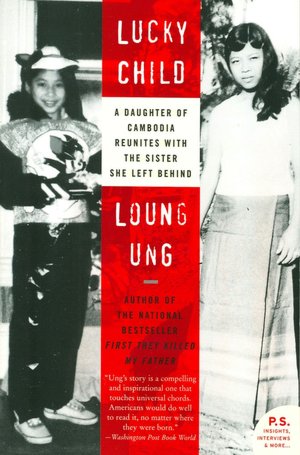 This book has a different tone and less immediate impact than the first, but ten-year-old Loung's new life brings more challenges, as she acclimatises to being a stranger in a strange land. Meng and Eang have been sponsored to come to Vermont, but are only able to bring one child with them. This means leaving Loung's two other brothers, Kim and Khouy, and surviving sister, Chou, behind in Cambodia. Chou is only two years older than Loung and the sisters have always been close, so their separation once more, after the trauma of life under the Khmer Rouge, is heartbreaking for them both.

Lucky Child alternates chapters between Loung's own story and her account of Chou's continued life in Cambodia, interpreted from Chou's own words in the years since they were reunited.

Loung new bedroom is next to a cemetery - not the ideal beginning for a child who has already seen too much of death. She has to cope with the plague of recurring nightmares, a stomach still distended through malnutrition, the stigma of food stamps and the problems associated with trying to fit in at school


At times, it all still seems so strange. One year ago, I was afraid of being killed by soldiers, now my big fear is that the teachers will call on me to answer a question. When I do get called on, my mind swirls and jumbles up all the grammar rules in my head. Then slowly I have to work my thoughts into a sentence and force my tongue and mouth to speak it.

Chou, by contrast, is living with her uncle and aunt in a village still regularly raided by the remnants of the Khmer Rouge. The land is full of mines and she fears for the safety of her brothers as well as missing her sister. Chou longs to go to school herself but has many domestic duties to perform, which keep her away from an education


Since the school opened three years ago, Chou has dreamed of attending. But eight months before, Aunt Keang gave birth to her seventh healthy child, a baby boy she named Nam. Though the family rejoiced, Chou was not smiling very widely that day because she knew there was yet another baby she'd have to take care of.

The cultural gulf between the day-to-day existence of Loung and Chou is one of the great fascinations of this book; they could so easily have been in each other's places. Although there's a huge contrast in the trajectory of their lives, they both experience joy and despair, the repercussions of what was lost and a void that won't be filled until they can be reunited. If like me, you came to care deeply about Loung and her family through First They Killed My Father, this sequel picks up where it left off; a still riveting triumph of determination and the human spirit against the greatest of odds.

Posted by Claire Thinking at 21:09