Two Gentlemen of Verona - Tobacco Factory and on tour

I've been making good progress with my bucket list lately, but started to worry about being able to see some of Shakespeare's less frequently performed plays. So when I spotted Two Gentlemen of Verona at the Tobacco Factory in Bristol, I leapt at the chance to see it before it sets off on tour. Post-booking, I'll admit to more than a quiver of anxiety though; lesser performed plays are often performed less for a reason.

Two Gentlemen of Verona is believed to be Shakespeare's earliest work for the stage, a comedy often best known for being the only play in which Shakespeare casts a dog. It introduces his oft-rehearsed themes of close friendships and star-crossed lovers, mixing them for good measure with a large dollop of inconstancy. 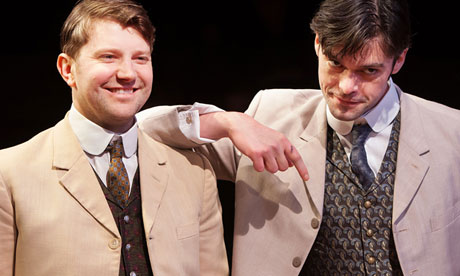 The play opens with Valentine discussing his imminent departure to Milan with his great friend Proteus - he'd like Proteus to accompany him, but Proteus is in love with Julia and wants to stay in Verona. But his father orders him to travel to Milan after all to complete his education, prompting a tearful farewell and exchanging of rings with his sworn love.

In Milan, Proteus finds Valentine now in love with Silvia and, despite his recent declaration of undying affection for Julia, he too falls for her. Problem is, Silvia's father, the Duke of Milan, wishes her to marry Thurio and locks her nightly in a tower, from which Valentine intends to free her with a rope ladder. Proteus tells the Duke of this plan and Valentine finds himself banished from the city to the forest beyond. Julia meanwhile has decided to follow her lover to Milan disguised as a boy and is distraught to find Proteus' affections now directed elsewhere.

The story may sound far fetched, but then Shakespeare often asks us to accept what must ever have been unrealistic - think of two sets of twins being separated in a shipwreck and coincidentally reunited years later or statues being miraculously restored to life. Proteus' mind-changing, albeit on an industrial scale, doesn't seem all that outlandish by comparison and it's made all the more believable in this production by the evenly-matched excellence of the Tobacco Factory ensemble, breathing life into characters which could so easily be two-dimensional. Proteus (Piers Wehner) is as likeable as it's possible to be in the circumstances, and his betrayal of friendship and love is portrayed as the rash, misguided foolishness of youth rather than anything more sinister. Valentine (Jack Bannell) is easily deceived by his friend but heroic in his actions and Bannell's comic timing in his scene with the Duke of Milan and the revelation of a hidden rope ladder is immaculate.

Julia (Dorothea Myer-Bennett) and Silvia (Lisa Kay) are played with great energy and spirit and their linking of arms at the end is a feminist triumph. Much of the comedy is provided by the servants Launce (Chris Donnelly) and Speed (Mark Geoffrey) who are spell-binding, making the most of every line and taking the audience along with them.

This was my first visit to the Tobacco Factory, and I felt myself falling in love, too - with this intimate space in the round that could be walked across and chatted upon until the lights went down, when all at once it transformed into the focus of our undivided attention. Andrew Hilton's direction is superb and there was greater clarity in the performance line by line than I've ever felt in a Shakespeare play that I haven't seen or read before. The design by Harriet de Winton, setting this production in the Edwardian era of pale, crisp linen suits is stylish and effortless and the music by John Telfer brings considerable charm and and cohesion to the production. The only uncomfortable aspect of the evening was the seating (and this is about to be upgraded)!

And then there's the dog...the charismatic Crab (Lollio) with his instinctive obedience undermining Launce's richly embroidered tales of Crab's wide-ranging misdeeds.I could hardly believe from the programme that this is Lollio's theatrical debut - he has his own blog but surely needs an agent as well! I found myself envying those in the front row who got to hold his lead and diverting my attention in his direction, no matter what was going on around him.

This is an evening spent in the sure hands of a company completely at ease with a play which stands up to scrutiny in its own right, a play which should certainly be performed more often. Two Gentlemen of Verona is now on tour to Lancaster, Cheltenham, Scarborough, Exeter and Winchester, facing the challenge of adapting to new and different spaces. I hope they remember to bring Lollios's blanket, water bowl and treats, but if they do I can only imagine this production will continue to be a triumph.

Pictures courtesy of Shakespeare at the Tobacco Factory

Posted by Claire Thinking at 11:27