Book Review: Reconciliation for the Dead by Paul E. Hardisty

Strap yourself in for a white-knuckle ride because Claymore Straker is back, in the third of Paul E. Hardisty's thrillers to feature the justice-seeking action hero. The Abrupt Physics of Dying saw Clay tackle environmental disaster and corporate corruption in Yemen, while by The Evolution of Fear,  he was fleeing for his life across Europe - in search of Rania, the woman he loves - only to become enmeshed in ecological devastation and murderous land grab on the divided island of Cyprus.

Now Reconciliation for the Dead takes us back to the beginning of Clay's story and his involvement as a callow young South African soldier in the Angolan border war of the 1980s. For those who've read the first two books, this is particularly satisfying; fleshing out events that shaped the flawed but driven man we've come to know, scarred both physically and mentally by the atrocities he witnessed. Yet, if this is your first encounter with Clay, the story still stands alone as an immersive and gripping thriller, that never lets up on the tension. 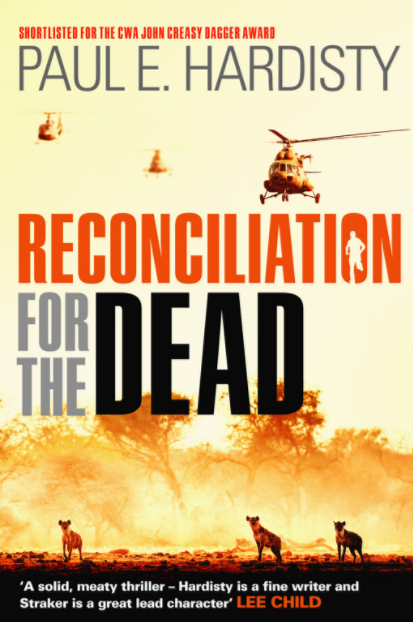 At the novel's opening, we find Clay returning to South Africa in the 1990s to testify to the Truth and Reconciliation Commission about events leading to his dishonourable discharge from the army and enforced exile. He has a debt to pay, to tell the truth on behalf of those who died for their beliefs. But, at the same time, he's forced to face up to his own actions 15 years earlier and to question whether he could have done more to save those he loved.

It's 1981 and the Cold War is at its height. As young paratroopers, Clay and his friend Eben are fighting the communist insurgency in Angola that threatens South Africa's Apartheid regime. Deep in enemy territory, they find themselves caught up in a conspiracy that undermines a previous unthinking faith in their country's cause. Bearing witness to ever greater and more visceral inhumanity, unable to stand by passively, they begin to reconsider their own allegiances. It sets them on a trail delving into a web of such unimaginable immorality, not only their own survival but that of an entire population is at risk.

What's really shocking is that the cold brutality depicted here is not the product of an unusually febrile and twisted mind, but, like Hardisty's previous books, based on true events. The level of detail from this ignominious period of South Africa's history is astonishing; from the terror and confusion of battle to the precise and horrific reasons for having specific items of equipment in a laboratory. It brings the story vividly to life; a corrupt regime doing whatever it can to protect its ideology. Those in positions of power killing without compunction to hold on to what they have. Faced with such ruthlessness, how far is Clay justified in using violence himself to defeat it?

Such philosophical questions raise Reconciliation for the Dead from being merely a hard-hitting, entertaining read to something more profound. It's interspersed with transcripts from Clay's interviews with the Commission; is he a reliable witness or has post-traumatic stress warped his memories and confused what really happened? The Commissioners seem divided; we find out little about them, but by their names discern they might be adopting different positions along ethnic lines.

There's less romantic distraction than in the first two books, with Rania only featuring at the beginning and end. Clay's relationship with fiancée Sara is unpromising - you can tell this, from the moment she visits him in the hospital and 'she looked heavier than he remembered her.' The most prominent female protagonist Vivian is a likely candidate but comes with her own troubled background and agenda.The storyline is all the better for it, concentrating instead on what Hardisty does best; tautly written, meticulously researched action and reaction in a spiraling collision of opposing forces, that has you hooked until the final page.


Reconciliation for the Dead by Paul E.Hardisty is published by Orenda Books in paperback on 30th May 2017. Many thanks to Karen at Orenda for my review copy.
Posted by Claire Thinking at 17:58