There's a particular excitement about watching something new and untested, the frisson of being in at the very beginning so you haven't been told what to think. Not only is Bluebeard a new production to Bristol Old Vic, developed as part of their Ferment programme, it also introduces theatre company Gallivant, although scratching their surface reveals a wealth of experience, not least from their writer Hattie Naylor and director Lee Lyford.

Bluebeard takes its inspiration from the French folk tale of that name, a dark and bloody fable of a nobleman who has murdered many wives and his latest spouse, who seeks to escape the same fate. Our protagonist Jim is acted by Paul Mundell, establishing his menace early by watching the audience from the stage before we can settle to watch him. As Jim builds the story of his first murderous relationship with Susan from Burnley in chilling and explicit detail, his manipulative and deviant character is laid bare for all to see. With his twisted smile and calculated delivery, Mundell embodies Jim's sense of ill-suppressed violence, one which apparently never fails to attract women in their droves. Without giving the subsequent story away, suffice to say this is a gruesomely compelling and deeply unsettling performance, in which I frequently found myself holding my breath. 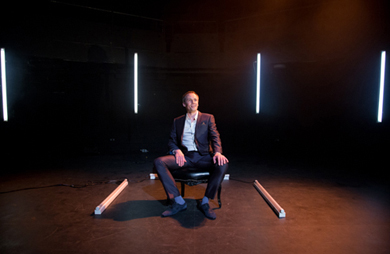 The monologue is powerfully written by Hattie Naylor, so many words yet none of them superfluous. There are satisfying touches of repetition as Jim commands his way, an iron fist in a velvet glove, to the inevitable ending of his various one-sided relationships when the gloves most definitely are off. I particularly liked Jim's impersonation of his new wife's aunt, which brought some welcome albeit short-lived light relief, and felt she could have had a greater role to play before the shockingly satisfying denouement. The use of exuberant northern soul music provides the opportunity for some tormented dancing while, at other times, sound combines effectively with the starkly illuminated set to create a series of searing images not easily erased. Having recently seen Hamlet at the RSC I thought I'd had my fill of fluorescent tubes for a while, but they are used to great effect, particularly in the latter stages of the production. 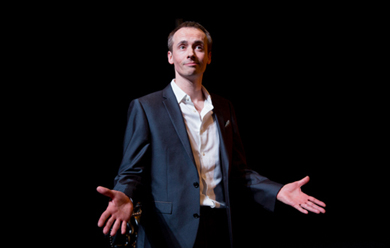 I came away feeling I would have liked a few more comedic moments, a genuine belly laugh or two, to lighten the tone of our encounter with this evil man. On reflection, though, those moments are there and perhaps just need to be enhanced. If one measure of good theatre is how long it stays with you, then the provocative and intelligent Bluebeard is very good indeed, a disturbing emotional assault, indigestion for the intellect. A highly promising start for Gallivant, catch it while you can at Bristol Old Vic, especially if you like to be made to think about the essential nature of attraction and eroticism, the roles we accept within relationships, the why and how in the creation of a monster. You'll need to steel yourself though, it's not for the faint-hearted and the 16+ warning is definitely there for a reason.

Posted by Claire Thinking at 15:04