Madame Tussaud's waxworks may be world-renowned and her name synonymous with lifelike images of the famous, but her own story remains much less familiar. Edward Carey's latest novel Little reveals the woman behind the models, in a quirky chronicle that blends a captivatingly original first-person narrative voice with a catalogue of detailed illustrations. 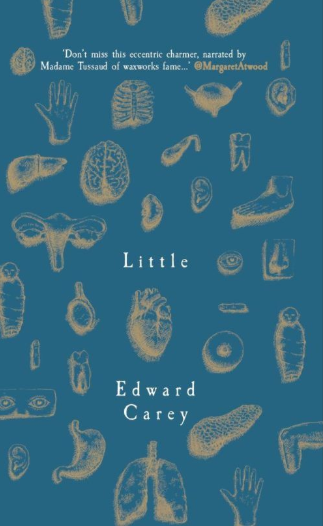 The tale begins in 1761 with the birth in a remote Alsatian village of Anne Marie Grosholtz, the girl who would one day become Madame Tussaud. More commonly known as Marie or simply - because of her stature - Little, she and her mother move to Berne when she is six years old, following the untimely death of her father. Here she becomes part of the eccentric household of Doctor Curtius, a man who initially models human body parts for the local hospital but progresses to making wax replicas of living human heads.

Fleeing insolvency, Curtius moves to Paris with Marie as his assistant. In this walled, wooden city, they find lodgings with tailor's widow Charlotte Picot and her son and embark upon an existence that will span an era of historical upheaval - from the closeted opulence of the court of Versailles to the grisly and vengeful bloodlust of the French Revolution.

In Little, Carey creates a remarkable heroine, never conventionally attractive in society's terms but quick-witted, resourceful and courageous. Life is always precarious for Marie and love in any form hard-won, but she takes crumbs of comfort where she can, clinging to her few precious objects and enduring her many reversals with pragmatism and a total lack of self-pity.

Despite being reduced to little more than a servant girl by Widow Picot and suffering years of her disdain, the business of wax heads prospers. Marie defies her station in life to brush shoulders with the great and the good, securing the position of sculpting teacher to Princess Élisabeth and meeting King Louis XVI. Unrest grows among the Parisian mob and she encounters more than her fair share of violent criminality, from domestic serial killers to the murderous architects of revolution. As Marie's fate is touched by history, she unfailingly records its ghoulish outcome in pencil and wax, her subjects more often dead now than living.

Despite scope and detail of epic proportions, the research behind this precise but pacy and entertaining novel is lightly worn. Little is a unique and beguiling fictionalised account of a woman small in stature but immense in achievement; a life that could stand alongside any of those that the eventual Madame Tussaud came to capture in wax.

Little is published in the UK by Gallic Books, many thanks to them for my review copy. You can read an extract from the book, catch up on an author interview, other reviews and more by clicking here
Posted by Claire Thinking at 18:45