Theatre Review: Crimes under the Sun at the Ustinov Studio, Theatre Royal, Bath 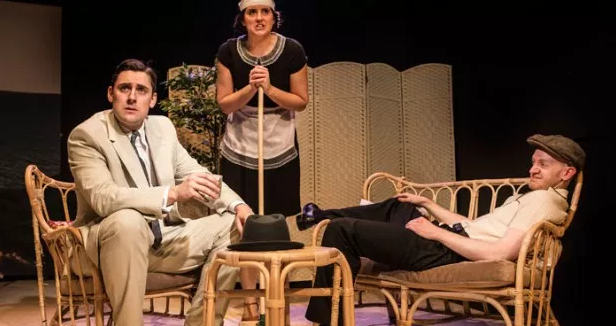 Returning to the Ustinov for the beginning of the Crimes Under the Sun UK tour, New Old Friends have really honed their brand of comedic Golden Age murder mystery. This third instalment of their Crimes capers, while conjuring up a classic mix of the bygone age of Agatha Christie and Noel Coward, has a decidedly modern twist of its own, replacing Hercule Poirot with a feminist Belgian super-sleuth.

Artemis Arinae, a renowned civilian detective, is holidaying in a secluded island hotel on the English Riviera while completing her memoirs. But when one of her fellow guests is found dead in suspicious circumstances, she instinctively becomes involved in solving the mystery. All the hotel residents are potential suspects and, with a hapless police force stranded on the mainland by a sudden storm, Arinae must cast aside a trail of false clues to uncover the murderer before more mayhem can be unleashed.

Spiriting up a cast of 14 with just four actors is a challenge the company relishes, with any slight mishaps being humorously improvised into the drama. From a thorough introduction of each character and their backstory at the outset, they swap between roles in an increasingly intense whirlwind of resourcefulness.

Jill Myers as Arinae is the only exception; in the eye of a storm of madcap events, she more than holds her own, an engaging and intriguing narrator who spins the unfolding yarn of explorers, free divers and shipping magnates with twinkling alacrity. Jonny McClean once again demonstrates his versatility as he swivels on a pinhead from gurning hotel owner to louche playboy to a diminutive precocious child, distinctively droll in each role. Meanwhile, husband and wife team Feargus Woods Dunlop and Heather Westwell create an array of suspects, from derring-do army major and unhinged priest to sporting rival and dispossessed heiress, with Westwell’s breakneck turn as a trio of police constables an unmissably inspired set piece.

Woods Dunlop’s original script is a masterclass in nimble, highly-tuned verbal interaction that delights in dual meanings and misunderstanding. There is some padding in the first half, as the complex premise having been established, the characters break out into an amusing but distracting song-and-dance routine. However, as events progress, James Farrell brings his West End experience from directing The 39 Steps to bear, in ratcheting up the velocity and immaculate timing. Carl Davies’s simple but adaptable Riviera hotel set is used with creative ingenuity, as magical spells are cast in a darkened cove, clues discovered on the sandy beach and suspects meet on a cliff edge – building to a frantic, farcical climax that rounds off this entertaining and inventive romp with gusto.

Posted by Claire Thinking at 13:48