Where next for Claymore Straker? He's tackled environmental contamination and endemic corruption stretching from Yemen to Cyprus, before returning to his native South Africa to testify about his incendiary past in front of the Truth and Reconciliation Commission. He's fled for his life so many times, it's beginning to take on the regularity of a daily commute. 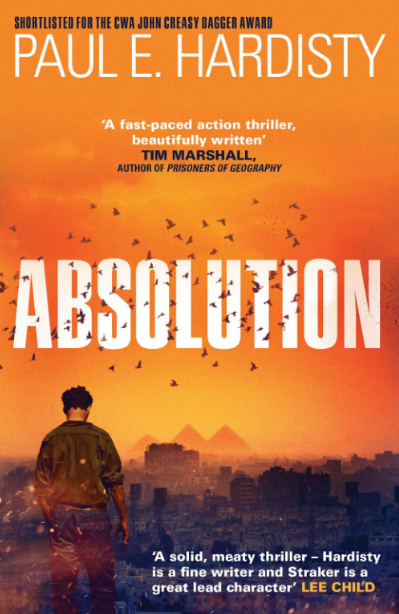 Set in 1997, Absolution is the fourth in Paul E. Hardisty's series of hard-hitting, socially conscious adventures, finding Clay laying low off the coast of Zanzibar, seeking uneasy sanctuary with a local family. This peaceful existence can't last, of course, and when gunmen arrive to shatter the lull, Clay realises there's still no refuge from the violent and bloody path he's been seeking to escape.

Meanwhile, in Paris, Clay's former lover Rania LaTour discovers that her husband Hamid, a prominent human rights lawyer, has vanished along with her young son. Her journalistic instincts lead her towards unearthing the most painful of stories: that their disappearance is somehow linked to a case that Hamid had been fighting in Egypt and that their very survival is in doubt. As Rania is forced to flee France for Cairo to find out what has really happened to her family, she embarks upon a perilous investigation that she calls upon Clay's help to resolve.

Rania plays a more prominent role in Absolution than she has in the first three novels, her writings in her diary - addressed in the second person to Clay - alternating with his unfolding third person narrative. Rania abhors violence in any form and this brings a counter-balancing perspective to the havoc he seems forced to wreak simply to save his own life. In some ways, we get to know Rania better - her past and the faith that guides her - although she still remains a character defined by her own desires and desirability, as seen through Clay's and other men's eyes.

Still, in this multi-faceted thriller, there is no shortage of fresh perspective to be found. Clay may be war-damaged, physically scarred and mentally ravaged by killing, mentored by his steely-hearted former commanding officer, the aptly nick-named Crowbar, to hit first and hit fast with whatever weaponry is at hand. Even so, hope emerges for him to edge towards the absolution of this book's title, even if it is brought about by the witnessing of yet more death.

Hardisty has become expert in piling on the adrenaline-fuelled tension and the page-turning pace in Absolution never lets up. Plot twists fly like shrapnel and environmental and political concerns are revisited in the chaotic labyrinth of 1990s Cairo and the dramatic backdrop of the Nile Valley. Peeling back the personal, social, religious and governmental layers of the complex plot to reveal the kernel of truth within is as satisfying in this novel as in the first three instalments of the Claymore Straker series.

Absolution by Paul E Hardisty is published by Orenda Books on 30 May 2018. Thanks to the publisher for my review copy.

To read my reviews of the first three Claymore Straker novels, click the following links:

Posted by Claire Thinking at 08:58