I really enjoyed reading Charlotte Mendelson's Daughters of Jerusalem a few years back. Though it seems I've now lost my copy (did I lend it out?), I still recall soaking up all its teenage intensity and dark familial strife, the prodigious intellects and claustrophobic cloistering of its hallowed Oxford quads. So, when I saw Charlotte was coming to Topping & Company in Bath to talk about her new novel Almost English, I leapt at the chance to go along. 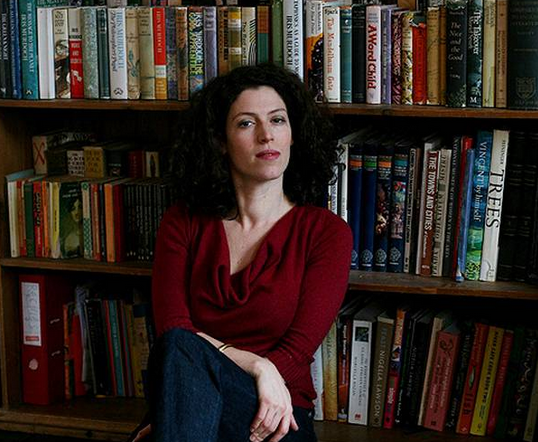 Charlotte was interesting, engaging and funny and (no surprise here) I bought a copy of her latest book on the spot. But, this proved to be the last I saw of it for a while, as my daughter carted it off to Uni along with the rest of her life. At some stage she returned it to my ever-expanding bedside reading pile from whence, to my shame, it has only just emerged.

In Almost English, Mendelson revisits familiar themes of adolescent uncertainty and family tensions in the form of Marina, a sixteen-year-old schoolgirl who, alongside her mother Laura, lives in a cramped flat in Bayswater with her ancient Hungarian relatives. From the outset, this is a story saturated with the paralysing alienation which Mendelson captures so effectively; Marina may love her grandmother Roszi and great aunts Ildi and Zsuzsi, but their heavy accents, reverence for traditional Hungarian food, noisy socialising with endless cousins and idiosyncratic lack of inhibition all swaddle her in excruciating embarrassment and reinforce the differences between her life and those of her peers:


Despite their absolute silence on matters sexual and the lengths to which they will go to avoid being seen entering a toilet, Roszi and Ildi and Zsuzsi are startlingly relaxed about the female body, keeping each other company when they have baths, stumping around the flat in nothing but supportive Swiss underwear and rubber orthopaedic shoes. Marina may be young but they show her no quarter, continually whipping back shower curtains, patting her popsi, assessing the progress of her breasts.

To make matters worse, Marina has taken a decision which she almost immediately regrets; swapping her day school attendance at Ealing Girls' for the life of a boarder at Combe Abbey, a traditional English public school in the depths of Dorset. Here, surrounded by honeyed-stone walls and moneyed pupils, Marina feels even more at sea; homesick for the very family she's ashamed to belong to, with a growing obsession about the harm that may befall them while she's away. She develops a crush on one boy but begins a relationship with another; Guy Viney, whose house and family, for all her awkwardness in their presence, begin to assume greater importance to her than Guy himself.

Meanwhile, Laura is having her own quiet breakdown, as Marina's term-time absence creates a void in her life - or rather increases the gaping hole that opened when her husband Peter, Roszi's son, deserted her many years ago. Nor are the Hungarian in-laws too afraid of mentioning this:


'Nev-airmind,' the cousin's wife is saying cheerfully, putting her bony hand through Laura's arm and frog-marching her back into the throng. 'One day when you are old vom-an like me you understand. Men leave. Children leave. All that is left is death.'

Mendelson's eye for detail and skilful prose are as much in evidence as ever. For all the similarities of subject matter, Almost English is funnier and not as dark as Daughters of Jerusalem, although the comedic episodes sometimes feel like a mask, obscuring the deeper story that lurks beneath.

Much of the comedy centres around the great aunts; they are overbearing and frequently hilarious, but Mendelson captures them with such affection that they become much more than caricatures. Indeed, the emerging account of why they arrived in Britain after the war with much diminished wealth and the central puzzle of their aversion for the Vineys has the potential to be so captivating, I found myself wondering whether this might be where the real story lay.

Almost English is available in paperback in the UK from Picador Books. Pictures courtesy of The Independent and Man Booker Prize.
Posted by Claire Thinking at 15:31