A Tale for the Time Being by Ruth Ozeki

We all know the outcome of the 2013 Man Booker judging by now, who the winner was and, more pertinent to this post, who it wasn't. It only takes a glance back at winning books over the years to realise just how arbitrary the whole process can be, with previous judges often reflecting how they made the 'wrong' choice, now they can see which of their shortlist has matured into (that most elusive of genres) a classic. Many prominent authors have been passed over for the ultimate prize altogether (think Beryl Bainbridge or Martin Amis), while others have won it for a lesser novel (Margaret Atwood and The Blind Assassin) simply to make up for having missed out with a greater one (A Handmaid's Tale, Alias Grace).

It's an achievement even to make it to the longlist, of course, never mind the shortlist. But, doubtless this is of little comfort to all the other shortlisted authors this year, as they switch from having their novels scrutinised before the award ceremony on every review show going, to being frozen out of the spotlight as the winner Eleanor Catton is feted for only her second book The Luminaries. So, in defiance of the unwritten embargo on discussing any of the novels that didn't win after the event, I'm going to review the one I've just finished reading; Ruth Ozeki's A Tale for the Time Being. 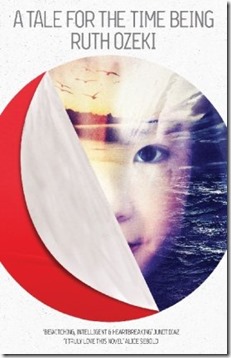 This is a novel of ambitious scope, beginning with Nao, a sixteen-year-old Japanese girl, writing from her table in a French maid cafe in Tokyo. She writes to make a connection with her reader, which could be you or me but turns out to be Ruth, a writer who finds Nao's diary inside a Hello Kitty lunchbox on the shoreline near her remote home in British Columbia. Ruth speculates with her husband Oliver that it could have been washed up there as a result of Japan's earthquake and tsunami in 2011 and the more she reads, the more concerned she becomes for Nao's well-being. She scours the internet for names and references, trying to find a tangible reality for Nao, her programmer father Haruki, who lost his job in California and was forced to move his family back to Japan, and Jiko, her ancient Zen Buddhist great-grandmother. What Ruth uncovers and experiences as she comes close to finishing the diary, leads her to question not only her sanity, but also her own fundamental perceptions of existence.

Ozeki is dealing with some big philosophical themes here, using both Zen Buddhism and quantum mechanics to examine the nature of time itself and the ways in which we are all inter-connected. She questions the relationship between the writer and the reader; linking Nao and Ruth brings together two very different women and their cultures. Initially, I found Nao's voice to be the more compelling one - she writes in the first person as an angst-ridden teenager who finds herself an outsider in her own country, suffers the most brutal bullying at school and copes with a loss of status as well as her father's suicidal tendencies. Yet, she is also an amusing and charismatic narrator who can laugh at her own predicament and finds solace in her great-grandmother Jiko's beliefs.

Initially, Ruth seems something of a cipher - there as an instrument to comment on and clarify Nao's diary, supplemented by the chunks of information supplied by her super-knowledgeable husband. Slowly, though, her story begins to grow; there are nuances lurking below the surface of her marriage, a sense of being trapped in her own existence as a writer who has no words. Over the course of this novel, Ruth develops her own narrative, both in response to her immediate environment and through reading Nao's revelations.

I devoured this story for its sweeping breadth, combined with the very up close and personal examination of the interwoven lives of these two very different women. Having said that, though, it isn't without its flaws; ever since Bobby Ewing stepped out of the shower in Dallas all those years ago, I've had a dislike of any form of resolution achieved through dream sequences. As a plot device, it's nearly always a cop out, even though it's perhaps a little more acceptable in this book because of the feeling that reality is already being stretched taut.

A Tale for the Time Being is generally very well-written, but, because Ozeki is bringing so many strands together, it does occasionally feel a little lacking in fluency. Overall though, this is a major achievement by Ozeki; a book of multiple facets I simply didn't want to end. At the moment, I can't think the other novels on the Man Booker shortlist are more thought-provoking and absorbing than this one, but I really should tackle The Luminaries and judge for myself.

A Tale for the Time Being is published in paperback in the UK by Canongate Books. More information about the book and its author is available here
Posted by Claire Thinking at 12:21

Email ThisBlogThis!Share to TwitterShare to FacebookShare to Pinterest
Labels: A Tale for the Time Being, Canongate Books, Man Booker Prize 2013, Ruth Ozeki