Book Review: I Am Dust by Louise Beech

It feels odd in these unprecedented times to be doing something as normal as reviewing a book (let alone publishing one). Though the birds are still singing and the trees blossoming with the onset of spring, for many of us in lockdown, life is very much curtailed.

Usually, I have the shape of what I want to say in my head long before I begin to type, but right now words are proving elusive. Luckily, discussing a book by someone whose writing I've come to relish makes the task considerably easier.

I've previously written on my blog about Louise Beech's Call Me Star Girl and (my personal favourite to date) The Lion Tamer Who Lost. Now, never an author afraid to switch between genres, she has penned a supernatural murder mystery thriller with a twist of romance: I Am Dust is set in a theatre suffused with ghostly apparitions, magic, and unexplained events. 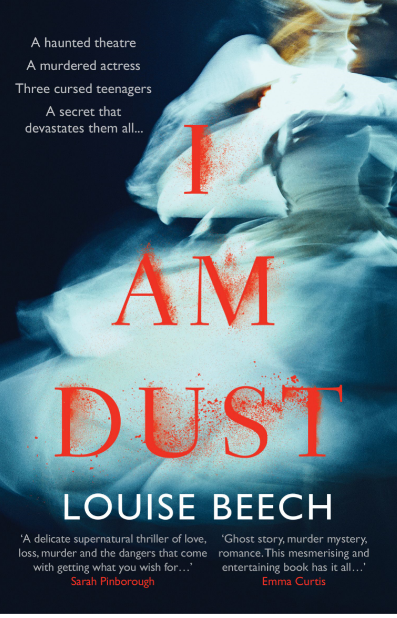 Chloe Dee works as an usher in the Dean Wilson Theatre, a venue infamous for the murder of leading lady Morgan Miller at its opening production of the musical Dust more than 20 years ago. As with so many theatres where superstition abounds, the Dean Wilson has a reputation for being haunted, with Morgan waiting in the wings for her final cue or searching the passageways for her killer.

Like many an usher before her, Chloe dreams of being there to do more than simply 'pick up the glitter'; she is writing her own play, which she would one day love to perform. But she also has a facility for tuning into other-worldly happenings - strange voices over the radio waves or doors that lock of their own accord. And when it is announced that Dust will be returning to the theatre for another run after all these years, memories are stirred as the new cast includes a face from Chloe's past in the iconic leading role.

Alternating with this present-day story is an earlier narrative strand from 2005. Over the course of one feverishly hot summer holiday, the teenaged Chloe becomes drawn into playing 'The Game': talking to the spirit world through the medium of a Ouija board, together with Jess and Ryan, two friends from her youth theatre's production of Macbeth.

Relationships within the trio are complicated; confused teenage emotions and jealousies abound. Then, as portents coalesce and the messages from the other side become more frequent and urgent, Chloe begins to discover the extent of her powers. But why has she forgotten so much of what happened that one formative summer? And why are those memories only now resurfacing, warning that the three former friends should never again be together under one roof?

As an avid theatre-goer and reviewer, I was attracted to this novel by its authentic depiction of life in a regional theatre; the artistic egos and outsized personalities contrasting with the everyday pressure of an usher's role in selling programmes, curtailing mobile phone usage and putting out the rubbish after a show. Initially, at least, I was less intrigued by the world of magic and the supernatural, yet because of Beech's clever structure, knack of always writing from the heart and characterisation skills, my perceptions quickly changed. What might have been melodramatic becomes believable in her hands and I found myself increasingly invested in Chloe's plight; fragile, sensitive and damaged she may be, but you can't help but root for her as she gradually begins to discover her own underlying strength and talents. 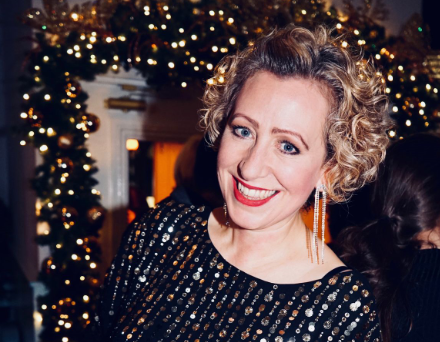 Then there's the theatre noir conundrum of who really did murder Morgan Miller: all those false leads, dovetailing into Chloe's own fate, prove a perfect distraction from the real world right now - one where live theatre has gone dark. I Am Dust will fuel your curiosity, capture your imagination and tug at your heart-strings, while its intriguing and satisfying ending brings with it a welcome sense of completion.

I Am Dust is published by Orenda Books in paperback on 16 April 2020, or already available in ebook format. Many thanks to the publisher and Anne Cater for my review copy. 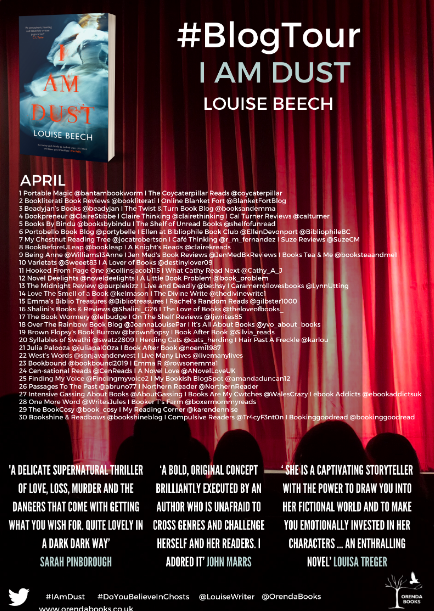 Posted by Claire Thinking at 06:58

Email ThisBlogThis!Share to TwitterShare to FacebookShare to Pinterest
Labels: I Am Dust, Louise Beech, Orenda Books