Theatre Review: Much Ado About Nothing at Tobacco Factory Theatres, Bristol 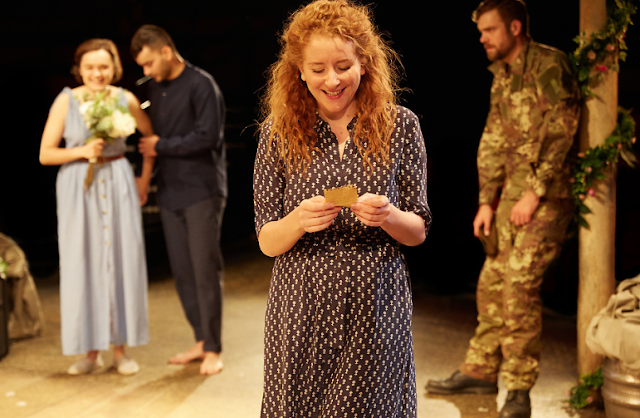 Shakespeare at the Tobacco Factory celebrates its 20th anniversary season in some style with a second production of Much Ado About Nothing. In her modern dress interpretation, director Elizabeth Freestone mines all the play’s sharp-tongued humour and disquieting duplicity to create a contemporary romantic comedy with a dark heart.

She has assembled a strong cast, including returning regulars and alumni from Bristol Old Vic’s theatre school, to deliver the tale of soldiers coming back from war to Leonato’s court in Messina. Zachary Powell is on commanding form as their leader Don Pedro, hatching plots to bring about the liaisons between Claudio and Hero and Beatrice and Benedick that underpin the play’s dynamic.

There are shades of a general seeking to keep his men on track in the aftermath of conflict, with light-hearted subterfuge helping them readjust to civilian life. By contrast, Georgia Frost’s Don Jon demonstrates the bleaker side of war’s profound psychological disturbances, as a soldier intent on darker deceits—slandering Hero’s virtuous reputation and causing Claudio to shame her—to avenge past perceived wrongs.

Dorothea Myer-Bennett delivers a beautifully judged Beatrice; intelligent in her fiery wit while verbally jousting with Benedick, she is alternately comic in falling for her friends’ playful deception of her sparring partner’s supposed declarations of love, then raging at her powerlessness as a woman in a man’s world. Whenever she’s on stage, it’s hard to look elsewhere, but Geoffrey Lumb’s convincing Benedick matches her in spirit. Though often outdone by Beatrice’s wit, Lumb finds depth beyond Benedick’s initial combination of charismatic swagger and gullibility, to declare his love with truthful sincerity and rally to her entreaties to right the wrong of Hero’s fate. 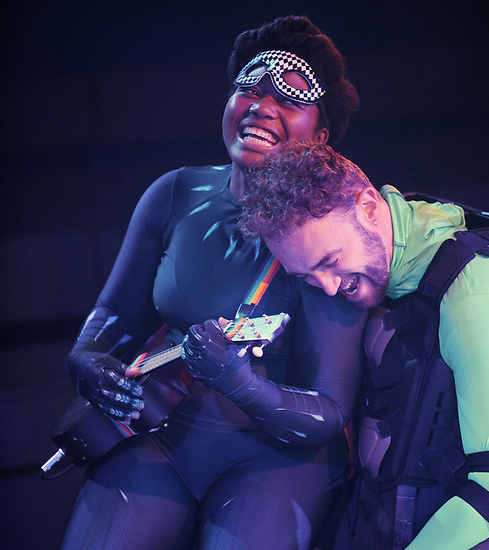 At times, the production feels as though it is veering too far into comic cliché with the masked ball, where many of the initial plans are laid, becoming a distracting superhero costume party. After the interval, the local Watch uncovering Don Jon’s connivance in full-on health and safety mode, complete with hard hats and high-viz jackets, feels rather over-worked. But Jean Chan’s minimal set and costumes are bright and summery, and there’s a joyous energy throughout, both in the dancing and in the musical interludes provided primarily by Bethan Mary-James as Hero’s maid Margaret—who gets away surprisingly lightly with her central role in her mistress's undoing.

After so many comic interludes and festive wedding preparations, the outcome of Claudio and Hero’s nuptials is brutally shocking; Imran Momen’s previously restrained Claudio is vicious in his rejection of Hannah Bristow’s sweetly trusting Hero. Equally outrageous to modern sensibilities is Leonato’s response in dismissing his daughter’s pleas of innocence and wishing she were dead. In a moving portrayal, Christopher Bianchi brings believability to Leonato’s short-lived paternal outburst, tumbling into sorrow and remorse as he accepts that she has been wronged. 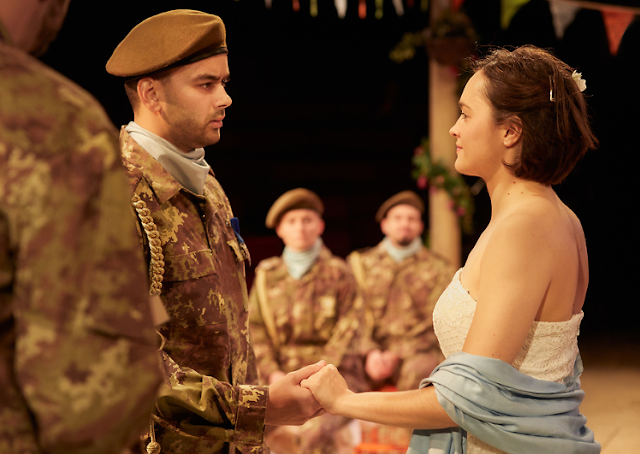 As with many a Shakespeare play, it seems a long way back from here to a happy ending, with further deception, identity switching and a whole dose of forgiveness required to reunite the lovers. But Shakespeare at the Tobacco Factory’s reputation for clear and compelling storytelling lives on; particularly in the latter stages, this dynamic yet thoughtful and nuanced interpretation treads the fine line between comedy and tragedy with consummate ease.