I first heard of German crime fiction author Simone Buchholz when Blue Night was one of the picks for 2019's Around the World in 10 Books, a fab Bath Festivals event that celebrates world literature.

Not only did the thriller sound right up my street, but its English translation by Rachel Ward has also been brought to the UK by one of my favourite independent publishers, Orenda Books, who very kindly sent me not only Blue Night but also its sequel Beton Rouge. I romped through both volumes during a slightly soggy week's holiday and so here, dear reader, are two reviews in one. 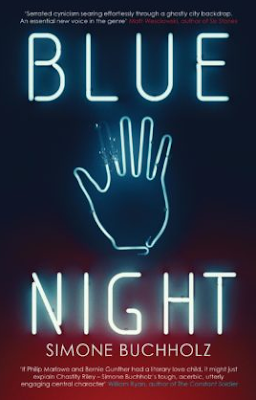 Rather than receiving recognition for skewering a corrupt superior, Hamburg state prosecutor Chastity Riley finds herself demoted to the monotony of witness protection. Out of luck and out of sorts, she tries a weekend break in the country, only to find that - a city-dwelling fish out of water - she needs to be rescued by an old friend.

Back in Hamburg, Riley is called on to protect an unidentified man lying in a hospital bed, badly beaten and under police guard. Her instincts tell her he's embroiled in something big: as the man who calls himself Joe begins to recover, she does all she can to gain his confidence. Joe reveals just enough to arouse Riley's suspicion of a major drugs deal and, though it's not really her job to investigate, she sets off on a trail to Leipzig. There, with the help of an enigmatic police officer, she uncovers a murky world of depravity and corruption stretching far into Eastern Europe, pointing back towards a notorious Albanian drug dealer now respectably settled in Hamburg.

Riley's unusual name arises from her heritage: her father was part of the American army stationed in Germany. A survivor of a troubled childhood, she now calls Hamburg - a city she was originally passing through - her home.

Here she has created her own eclectic family of friends - cops, reformed criminals and those seeking a better future - outsiders all and in some way damaged. Much of the novel's action is set in the colourful harbour district of St Pauli, with its famous Reeperbahn nightlife; the book's title refers to a club run by Riley's current love interest.

Blue Night is unflinching, pacy and darkly atmospheric with a ferocious, hard-drinking protagonist whose words are sharp as tacks - describing her own driving as like 'a cow on ice', judging a solitary visit to the countryside as akin to 'eating Sellotape'. Though this is the first Chastity Riley novel to be translated into English, it is the sixth book in the series. Inevitably, there is a backstory to catch up on, neatly incorporated by interspersing chapters with snippets of past thoughts of other major characters. It's a clever structure that informs while adding to the intrigue, without feeling too onerous or exposition-heavy. 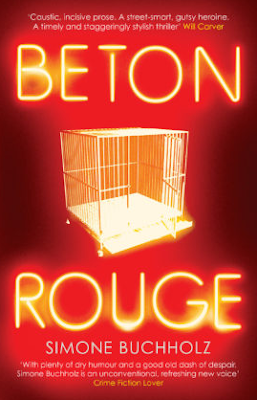 Beton Rouge picks up the grit where Blue Night leaves off, still mining the seamier underside of Hamburg's respectable veneer. One innocuous September morning, a man is found unconscious in a cage outside the magazine publishing office where he works; he's been tortured and is barely alive. He's soon identified as one of the company's senior managers but sympathy for him amongst his co-workers seems in surprisingly short supply.

Three days later, another manager is targeted in the same way and, as Riley probes into their past, deeply disturbing details of their shared boarding-school days gradually emerge. Bullied for years and subject to repeated humiliation, could this be the revenge of a shadowy and almost forgotten victim on his tormentors?

Where Blue Night's German noir hooks you, Beton Rouge's short, pithily-titled chapters reel you in. It's a page-turner shot through with black humour and the everyday dramas of Riley's life - cooling relationships and divided loyalties - play out against the mounting tension of a race against time to avoid a murderous conclusion.


Blue Night and Beton Rouge by Simone Buchholz (translated by Rachel Ward) are both published in the UK by Orenda Books. Many thanks to the publisher for my review copies.

Posted by Claire Thinking at 10:28