Archie Blunt is one of life's also-rans, scratching a living in 1970s working-class Glasgow. But he's a man with big dreams and a beady eye for an opportunity. Sacked from his bus conductor's job, he begins working as a chauffeur for one of the city's most notorious bookies, only to find himself with a celebrity passenger in the form of the renowned talent show host Hank 'Heady' Hendricks. When Archie inadvertently saves Hendricks's life in a bizarre confrontation, he seizes the chance to audition his new singing group made up of five callow youths from Glasgow's East End. Before he knows it, he and The High Five are on an unexpected path to fame and fortune, but there are complications ahead, as some powerful enemies with too much to lose threaten to catch up with him. 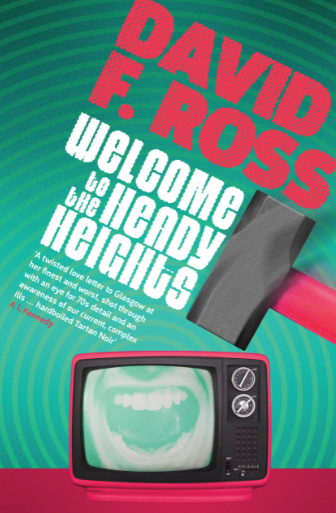 Reading the synopsis for this novel instantly brought to mind Roddy Doyle's The Commitments, transplanted from Dublin to a Glaswegian setting. But while The Commitments harks back to an earlier musical era, Welcome to the Heady Heights is immersed in 1970s British culture. There's no shortage of allusions to real events for those (like me) who were around at the time to revel in nostalgically. David F. Ross's playful take on the talent show Opportunity Knocks, complete with its charismatic presenter - catchphrases and all - and infamous clap-o-meter measuring audience reaction, is a delight.


He wore a fawn three-piece suit with a large-collared shirt open at the neck. It revealed a large coruscating disc of silver, nestled comfortably into a nest of dark hair, like an alien spacecraft that had landed in a dense forest clearing. Shiny black hair was slicked back from a widow's peak, giving Heady the air of a seductively tanned Ray Reardon. A pencil-thin black moustache hinted at charismatic menace. His flattened boxer's nose made him look like a bank robber sheathed in American tan.

Ross also draws a fine parody of the workplace hell endured by women police officers at that time, taunted with relentless sexism, relegated to making tea and accompanying the wives of public figures on their shopping expeditions. But for all its laugh out loud moments, there's plenty of darkness and grit in the mix. WPC Barbara Sherman strives to advance beyond her menial duties and, while investigating a missing person's case, stumbles upon a plot that stretches all the way from a notorious homeless hostel in Glasgow to a shady amoral club of the entitled elite known simply as 'The Circle'.

The lonely and hapless Archie may have the legendary Jim Rockford of The Rockford Files as an imaginary friend but, as he gets in over his head, he's in danger of meeting a violent end. This is an enjoyable helter-skelter ride of multiple perspectives with an exceptionally strong sense of place. Filled with larger-than-life characters, the strong Glaswegian dialect may occasionally prove a little difficult to decipher for those of us born south of the border, but hold on in there for the twisted thrills and spills along the way.

Welcome to the Heady Heights is published in paperback by Orenda Books on 21st March 2019. Thanks to the publishers for my review copy. 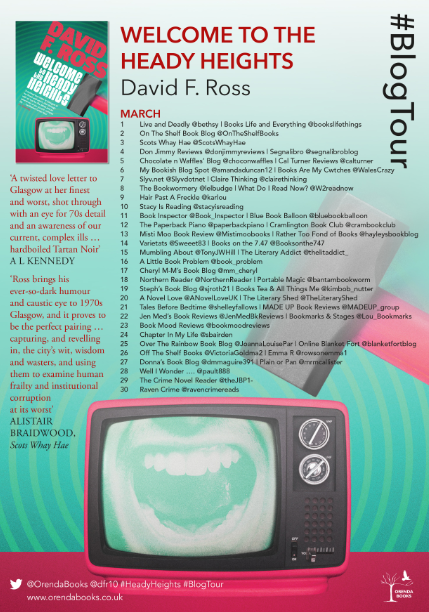 Posted by Claire Thinking at 17:16