Book Review: In the Full Light of the Sun by Clare Clark

Ever since watching an incandescent Liza Minnelli play Sally Bowles in the 1972 film Cabaret, I've been fascinated by the cultural, economic and political maelstrom that was Berlin between the two World Wars. So I was instantly attracted to Clare Clark's new novel In the Full Light of the Sun, which evokes the glitter and decadence, hyperinflation and growing political extremism of the short-lived Weimar Republic. 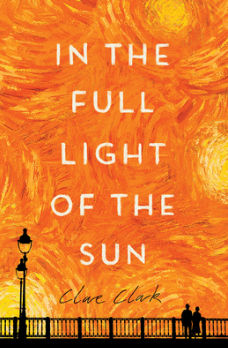 Inspired by real-life events, Clark explores the turmoil wrought in the rarified 1920s German art establishment by the emergence of a cache of previously unknown paintings by Vincent van Gogh. Events unfold through the eyes of three diverse but interconnected Berliners: Julius, a celebrated art critic called upon to authenticate the paintings; Emmeline, a rebellious young artist who seeks his help to escape her overbearing mother and Frank, a Jewish lawyer caught up in the scandal over the paintings' origins, witnessing the rise of Nazism with mounting terror.

All three find their lives thrown into disarray by their involvement with the enigmatic art dealer Matthias Rachmann. Flattered by his deference, Julius becomes Matthias's mentor and friend, supporting his rapid rise in the art world and legitimising the van Goghs he sells from the collection of a mysterious Russian. Emmeline, capricious and gifted but struggling to support herself, becomes drawn into the web. And finally Frank, denied employment by a society that despises his existence and fearing for the safety of his family, stumbles across further secrets as he reviews the Rachmann case he previously defended in court.

Clark, with a background in historical novel writing, has meticulously researched her subject and brings the setting vividly to life. Her initial narrative from Julius's perspective is particularly well-drawn; she captures his sense of entitlement as a reputed establishment figure, his intimate appreciation of the beauty and perfection of art that transcends his flawed and friable relationship with his wife and young son. The myopic self-regard and vested interests of the art world are laid bare, for where do truth and value really lie? As authenticity is first confirmed and then denied, a painting worth a fortune one day, robbed of its provenance the next, can be instantly reduced to worthlessness.

At times, the changing perspectives affect the novel's cohesion and I found Emmeline's story to be more fractured, pinballing to different extremes as a reaction to her mother's narrow viewpoint. For all her artistic talent, Emmeline is, after all, just a young girl trying to figure out what it is she wants from life; existing on the fringes of respectability, she meets a struggling writer with a nose for a story and finds herself accused of fraud by virtue of her own prodigious talent.

Frank's section of the book is the only one to be written in the first person, a diary of the horrific persecution suffered by Berlin's Jews when the Nazis rose to power.  As modern-day readers, we appreciate the full extent of the brutality about to be unleashed, but it is still chastening to absorb the everyday terrors, inflicted not only by the fanatical street-corner Brownshirts but also ordinary non-Jewish citizens ready to grasp a scapegoat for society's ills. Yet Frank is the one to uncover the story's central mystery - though some of it you may already have guessed by now. To Clark's enduring credit, she manages to weave the three disparate strands of her intriguing narrative satisfyingly back together by the end.

In the Full Light of the Sun by Clare Clark is published in hardback by Virago Press on 28 February 2019. Thanks to the publishers for my review copy.

Posted by Claire Thinking at 09:23

Email ThisBlogThis!Share to TwitterShare to FacebookShare to Pinterest
Labels: Clare Clark, In the Full Light of the Sun, Virago Press