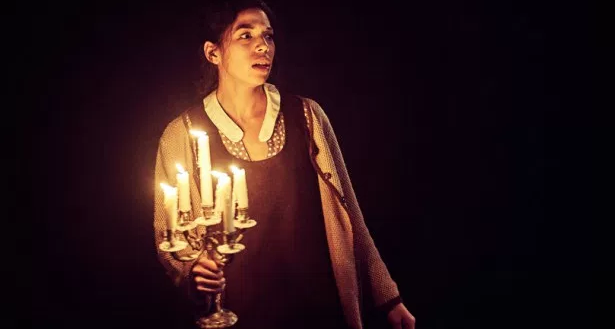 Bristol’s Tobacco Factory has garnered a deserved reputation for the quality of its family Christmas shows and this year’s playfully quirky Beauty and the Beast is no exception. Think Disney unplugged; New International Encounter (NIE) and Cambridge Junction, under the direction of Alex Byrne, revisit the original French fairy-tale and strip it back to its story-telling essentials, conjuring up a delightfully eerie musical adventure full of mischief and heartfelt rustic charm.

The fable’s central message – that beauty is only skin-deep and it’s what’s under the surface that counts – may be well-worn but it’s delivered with real energy and freshness by NIE’s five-strong cast of actor-musicians. Maurice (Ben Tolley), a bankrupt Gallic shipowner, relocates his family to an impoverished hovel – known as Le Gite Terrible – in the middle of a forest. Terrible twins Latrice and Anastasia, played with ghastly verve by Samantha Sutherland and Stefanie Mueller (in this performance replacing Elliot Davis) hate their new environment and long to return to Paris, but Sara Lessore’s down-to-earth Isabella is drawn to the gite’s humble charms and soon has plans for a well-stocked vegetable garden.

Little do they realise that in a nearby chateau lurks a hideous beast – transformed from a vain and shallow playboy by a witch’s curse – until Maurice seeks shelter there in a storm and only escapes with his life when Isabella resolves to take his place as the chateau’s prisoner. Martin Bonger’s Beast combines the haunted, restless physicality of his enduring ordeal with a light-hearted turn as his new captive’s potential suitor; his song asking to be Isabella’s hairy fella is a comic masterpiece. Lessore, meanwhile, portraying a strong character in her own right, is also his perfect foil. Her Isabella radiates goodness and purity of heart without (despite her sisters’ condemnation of her creepiness) ever crossing the threshold into an annoying goody-two-shoes. The moments when she laughs at the Beast’s terrible Christmas cracker-style one-liners and later realises she loves him are full of poignancy and dawning revelation.

NIE and Cambridge Junction’s Beauty and the Beast is an enchanting antidote to everyday life. The original, folksy score is captivating and mood-changing, underpinning the narrative with a seamless blend of jaunty rhymes, searing strings, woodwind, percussion, and accordion. Stefanie Mueller’s inventive set design transforms from humble cottage to gothic chateau to table-top romance with the manipulation of a few wooden boards around a stage dotted with statues and foliage. Audience interaction (at this matinee with a house full of excited primary school children) is pitched at just the right level, while the simple addition of a wheel-barrow, a couple of chandeliers and some fallen leaves is all that’s needed to complete the picture.

Posted by Claire Thinking at 14:51