The shock of The Shock of the Fall

Everyone must have one.

A subject they don't like reading about. Something that hits too close to home. That threatens the tightly wrapped skin we all bandage ourselves in, to keep us from breaking apart.

A fatal crash. Cancer. The death of a parent. Or a child.

For me it's schizophrenia, the word that encapsulates a world of madness so terrible, it's hardly ever uttered. Except in association with mass murderers on the rampage, or when making crass jokes about Jekyll-and-Hyde-style split personalities.

When we were choosing our next book club read, I was the one who suggested Nathan Filer's The Shock of the Fall. It had just been selected as Costa Book of the Year and was at the top of my teetering To Be Read pile. I knew it was about mental illness. I thought I could cope.

Then I read the quotes on the opening page. And realised it was about schizophrenia. That's when I froze. My childhood was decimated by schizophrenia - my older brother's. It's the reason I can't bring myself to read about it in fiction.

Or hear The Dark Side of the Moon by Pink Floyd.

Or think about the amount of blood there is on a fist that's been plunged through a glass door.

Or the paperwork that comes with sectioning.

Or the side-effects of Electroconvulsive therapy.

Or be anything other than the child who's never any trouble, because this family has had far too much of it already.

What made me decide to go ahead and read The Shock of the Fall is that Nathan Filer is a registered mental health nurse. He's writing about this cruelest of illnesses from the inside - or the next best thing to it. 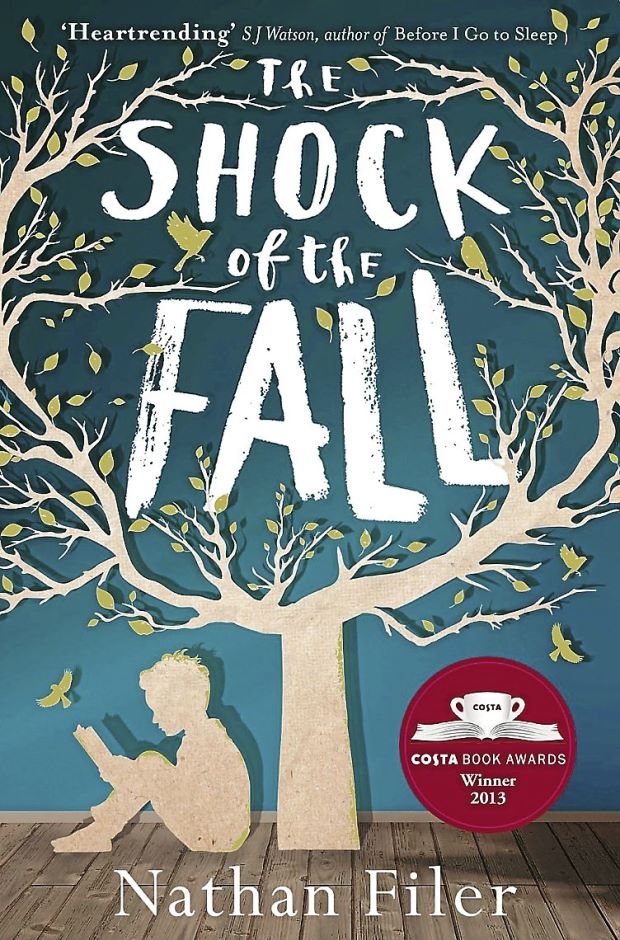 Matthew Homes begins by telling the story of his older brother Simon, how he died in an accident when he was a young boy, and how Matthew feels responsible. Gradually, we get to know the present day nineteen-year-old Matthew, piecing together his descent into mental illness. As for so many, his life becomes a cycle of hospitalisation, care in the community and attempts at independent living in a world where he still hears his brother's voice


He could speak through an itch, the certainty of a sneeze, the after-taste of tablets, or the way sugar fell from a spoon.

So often, schizophrenia sufferers are defined by their diagnosis and pigeon-holed as dangerously mad. One of Filer's many achievements is allowing us to see far beyond Matthew's symptoms, to feel profound sympathy for the sad and frightened boy that's underneath.

A schizophrenic's behaviour is frequently alienating and Matthew lashes out because of how the illness makes him feel. Not to mention the debilitating side-effects of his medication, dished up along with platitudes by those whose job it is to look after him. But he's also a talented and engaging story-teller who usually regrets his actions and tries to make amends. He's still able to make some human connections and has a fractured but enduring relationship with his parents and most of all his Grandma, Nanny Noo.

The Homes family have suffered the doubly-devastating blow of losing one beloved son, only to have the other afflicted with a terrible, incomprehensible disease. One of the many, many moving incidents in this story is when Matthew reads what his father has written on the bedroom wall, always anticipating it would be painted over before Matthew could see it

Never give up. That was my Dad too. I was frightened of reading The Shock of the Fall because of the unhappy memories it would rekindle. After all, it's easy enough to cause an explosion but much more difficult to stick things back together again afterwards.

I can't even try to review this book objectively, other than to say it's a wonderful, astonishing achievement. The typography and drawings are thoughtful and lovely. Despite the many harrowing scenes, its pages hold laughter, tenderness and redemption within them too. Because there is still hope; my brother is much better now and living with minimal support. I'm so glad I found the courage to read The Shock of the Fall and, if you haven't already, I'd urge you to do so too.

The Shock of the Fall is published in the UK by The Borough Press.

Posted by Claire Thinking at 18:57

Email ThisBlogThis!Share to TwitterShare to FacebookShare to Pinterest
Labels: Costa Book of the Year, Nathan Filer, The Borough Press, The Shock of the Fall