'Everything bad is real': in the darkly disturbing world of Alistair McDowall's Pomona, where time is fractured and reality blurred, this is one route to distinguishing truth from role play.

This dystopian thriller caused something of a stir when it was first staged in 2014. Originally commissioned by the Royal Welsh College of Music and Drama, it transferred from Richmond's Orange Tree to the National Theatre and was named as one of Lyn Gardner's Top 10 picks of that year.

Now, following a sellout run in their home city, University of Manchester's HiveMCR have brought their production of Pomona, co-directed by Tom Thacker and Kwame Owusu, to the Fringe. 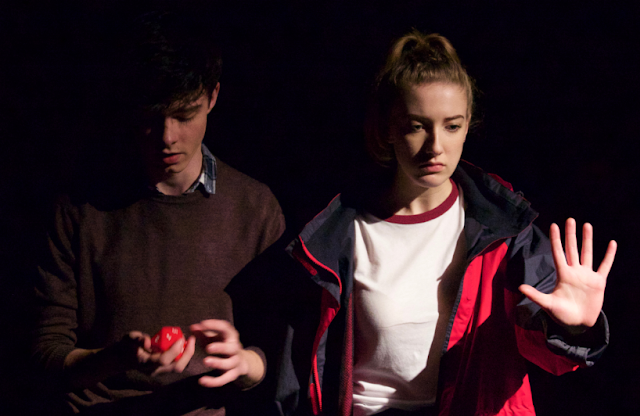 The story begins with a vulnerable young girl Ollie (Imogen Hayes) looking for her missing twin. In the course of her search, Ollie learns of Pomona, a deserted island in the heart of Manchester with a ring road running around it. Vans deliver daily through closely guarded gates, but their cargo is a mystery. The city's seedy underbelly is revealed in the lives of sex workers, those who seek their custom and those who profit from them.

Against a simple black backdrop with only a chalk circle and minimal props - aside from a monstrous octopus head - Thacker and Owusu skilfully build momentum with moments when the pieces of the puzzle almost seem to fit, juxtaposed with scenes that blow any sense of linear narrative wide apart. Is there a deeper exploitation taking place, a sinister cult intent on wreaking havoc, or is this all part of a role play game based on horror stories, devised by a geeky security guard in an effort to win friends?

There are strong performances across the board from the talented and committed student cast: I have to declare an interest as my daughter is one of them. Christopher Stoops is outstanding in the central role of unlikely security guard Charlie, full of an amenable puppy-like enthusiasm for fantasy and gaming - a naivety that belies a darker core.

Every character exudes desperation, some more immediately obvious than others. One of the many strengths of McDowall's fluid construct is that each character has their own story arc or, more accurately, existential loop they must circle. It's the points at which they intersect that become compelling. Even the bleakest of characters has a moral code they've failed to live by: Sam Whitehouse's conflicted henchman Moe's moment of redemption with Grainne Flynn's warm-hearted, damaged sex worker Fay is particularly affecting.

This production mines the work's moments of comedy, though it is of the bleakest kind, and you may need to give yourself permission to laugh. McDowall's worldview is unsettlingly pessimistic, but always prescient, taking in the information-rich 24-hour onslaught of popular culture, the facts we choose to act on and those we decide to ignore. Pomona is never short of gripping  - a riddle wrapped in a mystery inside an enigma (as Churchill once said of Russia), yet truly a parable for our times.