This review was written for Theatre Bristol Writers 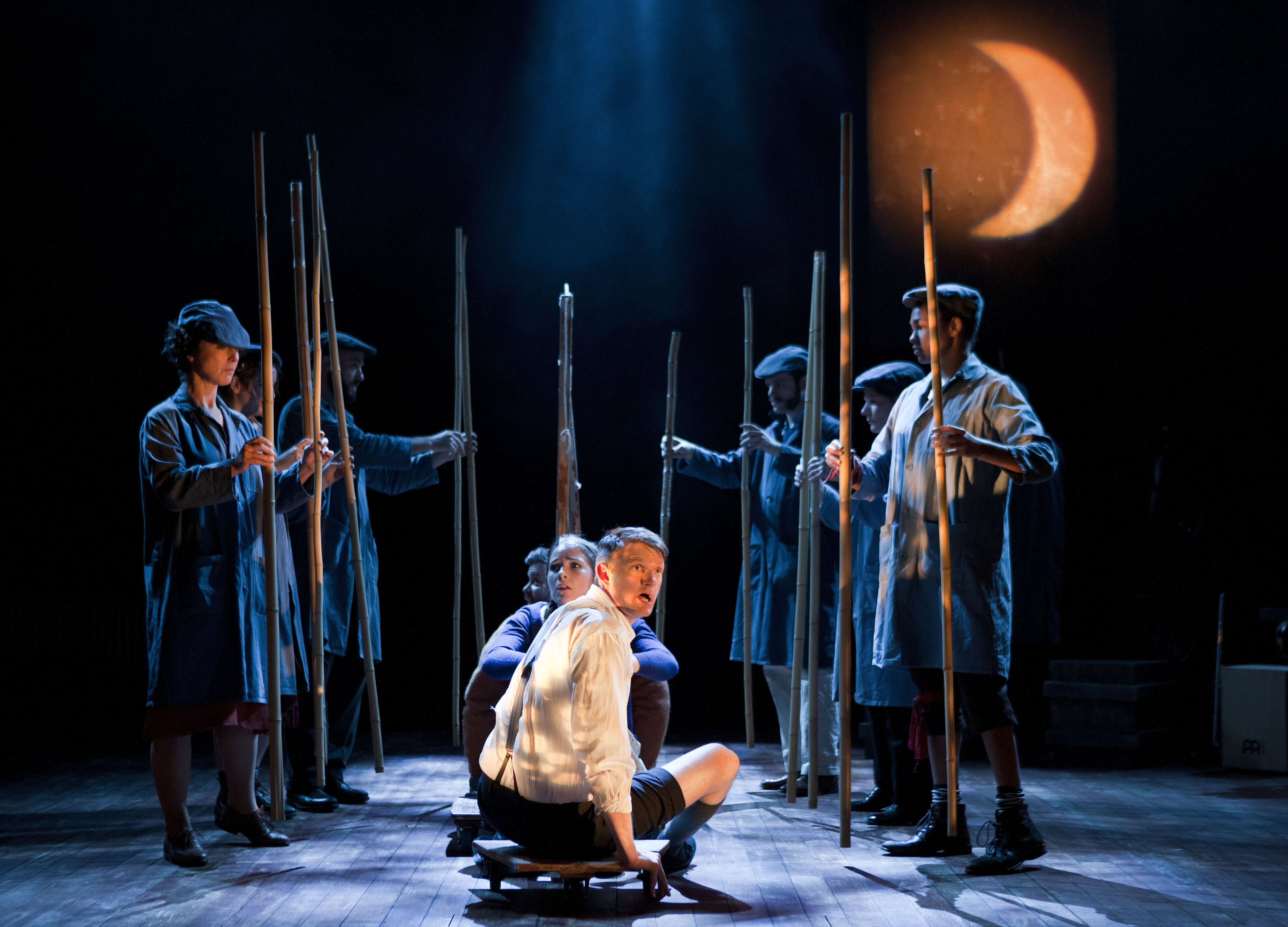 Childhood adventures don’t come any more exciting than those of the four Walker siblings, in Arthur Ransome’s classic tale Swallows and Amazons. Set in the summer holidays of 1929, Bristol Old Vic’s production captures its spirit from the beginning; a telegram arrives from the children’s father, permitting them to sail unaccompanied across the lake with the words ‘better drowned than duffers.’
Who needs CGI? Under Tom Morris’s direction the power of imagination is unleashed as wind is invoked and the Swallow sets sail, a wooden frame and wheeled platform negotiating a waterway of blue ribbons. Distant views through the telescope are reconstructed at the back of the stage in circular frames. As the children land on Wildcat Island, they keep a keen look-out for Barbarians, recreate their heroes from Marco Polo to Robinson Crusoe, and cross swords with real life enemies in the shape of two Amazonian pirates and their dastardly uncle, Captain Flint.Played by grown up actors, John, Susan, Titty and Roger combine all the energetic, quicksilver emotions of children with the fun of seeing full-sized adults (with facial hair in Roger’s case) dressed in silly shorts and bathing suits. Captain John (Stuart Mcloughlin) and First Mate Susan (Bethan Nash) are the oldest and notionally in charge. But Jennifer Higham is fearless and bold as Titty, leaping with great physicality from the rocks into the water, to be caught in the arms of the ensemble. And Tom Bennett captures the feverish irresponsibility of seven year old Roger, as he capers, sulks and trembles at the turn of events.The whole cast is outstanding; the two unruly Amazons (Evelyn Miller and Millie Corser) inject a slug of high-octane anarchy and the ensemble of ‘players in blue’ choreographs the action with attitude, sprinkling water in the children’s faces and whipping up the fiercest of storms.The intrigue of the first act is enhanced by Neil Hannon’s captivatingly original score and some wonderful musicianship. But it’s after the interval that the roof is really raised, showing how ready the audience has become for a bit of full-blooded interaction. The children in the front rows from St Peter’s Primary School in Portishead (who sang their competition -winning song ‘A Drop in the Ocean’ beautifully before the beginning of the show) seized their chance to bombard the on-stage fighters with foam rocks, while yelling for Captain Flint to be made to walk the plank – as if he has any choice in the matter.Helen Edmundson’s adaptation of Swallows and Amazons was first staged at Bristol Old Vic in 2010; this thrilling story of an endlessly idyllic summer holiday makes a welcome return for another Christmas season. It creates a horizon full of possibilities, where children are free to roam and grownups provide a safety net rather than a cage. Arthur Ransome wrote many more books in this series, so maybe there’s room for a second adaptation in the future?It would be great to think so, because this really is an unmissable family treat, captivating for children and adults alike. If we could, we might wish to inhabit this world forever; at least, with this revival, we can enjoy the sheer, unadulterated bliss of revisiting it for a couple of hours.

Posted by Claire Thinking at 12:05